The Minister complimented Corps of Signals for its yeoman service to the nation and for the astute understanding of the transformation required to realize a ‘Digital Army’ for modern battlefield. He also called for a separate category of fast track procurement for ICT equipment due to faulty technological obsolescence.

General Bipin Rawat, UYSM, AVSM, YSM, SM, ADC, Chief of Army Staff, highlighted need for indigenisation in ICT through innovation and focused development in key technologies. He called for ‘Indian Solutions’ to modernization of Armed Forces for promotion of self-reliance.

Lieutenant General Ashish Ranjan Prasad , AVSM, VSM, ADC, Signal Officer-in-Chief and senior colonel commandment, Corps of Signals, stated that infrastructure of operational communications systems requires collaboration of Armed Forces, Indian Industry, Academia and R&D Organisations.
Mr Chandrajit Banerjee, Director General, CII, lauded the Government and Indian Army for reaching out to Indian industry through road shows and interactions across the country. He requested the Ministry to consider fast tracking of decision on “Strategic Partner”; strengthening the Offset implementation team at the MoD and removing bottlenecks in discharging offsets; and greater participation of SMEs in defence programmes by making required changes in the procurement procedures.  He also highlighted the need to translate the these policy initiatives into concrete business proposals by expediting the acquisition process and awarding contracts to Industry which in turn will further boost manufacturing and further investments in technology or capacity.

DEFCOM Journal, a compendium of technical articles from industry, academia and Services personnel was released at the DEFCOM 2017.

During the two days, DEFCOM 2017 will have technical sessions on ‘Trends for India’s Digital Army – An Operational Perspective’, ‘Global Trends in Communications – A Technology Perspective’; ‘Satellite and Space Applications and Trends in Enhancement of Operation Security’ and ‘Skilling Human Capital and Re-orienting Organisational structures for Contemporary Battlefied Domain’.

DEFCOM 2017 is focusing on ‘Digital Army’ including Surveillance and Reconnaissance (C4I2SR) structure at Tri-Services and national levels. This will be a major leap in enabling augmentation of operational capabilities of Indian Army at strategic as well as operational and tactical levels. 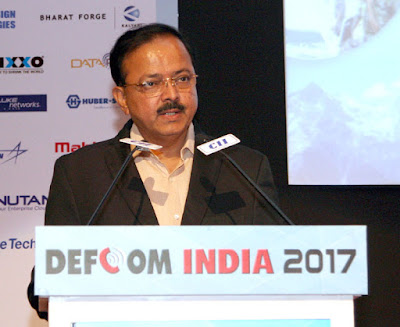 The Minister of State for Defence Dr. Subhash Bhamre said here today that increasing of infrastructure for the Digital Army based on State-of-the-Art technologies is a top priority of the Government. In his inaugural address at the DEFCOM INDIA 2017 with the theme ‘Infrastructure and Skilled Human Resource for Digital Army’, Dr. Bhamre said that this initiative for creation of operational information networks and systems should be expedited at all levels. He stated that the robust, secure, high capacity data networks and information systems are an urgent necessity for Operational Commanders. ‘They are also a critical facet of the force modernisation plans of the Indian Army, which will further form a fulcrum for Tri-services integration in times to come’, he added. The Minister however, said that the creation of infrastructure for the Digital Army will need indigenous Indian solutions and systems from security point of view. Dr. Bhamre emphasized that the creation of indigenous capabilities in Information and Communication Technologies (ICT) for the Defence sector will give a major fillip to the ‘Make in India’ programme.

Speaking at the function, the Chief of the Army Staff General BipinRawat said that in the present complex environment, technology is imbibed by the Armed Forces in a manner that will rapidly keep pace with the changing technologies before they become obsolete. “But for that to happen it is important that we are able to identify the correct type of technology and equipment that is to be inducted into the Armed Forces”, he stated. Gen. Rawat further emphasized that the Army has to keep pace with the digitized world and ensure that most of its systems are digitised as early as possible. At the same time it has to be remembered that war will be fought on the border and therefore the technology to be incorporated into the Army’s communication system has to be ruggedized and light weight.

The two-day event organised jointly by the Corps of Signals of the Indian Army and the Confederation of Indian Industry (CII), was also addressed by Signal Officer-in-Chief and Senior Col. Commandant, Corps of Signals Lt. Gen. AshishRanjan Prasad and Director General, CII Shri Chandrajit Banerjee. It was attended by senior officers from the Armed Forces, Indian industry, academia and R&D organisations.