Army Reacts To The Video Released by Sepoy SJ Lakhubahi 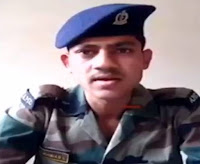 
1.         With reference to the recent video uploaded by an individual of the Army Medical Corps (AMC), played on few TV channels, the matter has been investigated. The individual concerned is Sepoy Sindhav Jogidas Lakhubahi employed in AMC in the trade of ‘Housekeeper’. He has rendered nearly three years of service in the Army.

2.         Investigations have revealed the following facts:-

(a)        While on his initial posting at Military Hospital (MH) Ranikhet, Sepoy Sindhav was late in rejoining duties after availing the leave for 2015.  He was awarded Pay Fine for unauthorized absence from duty.

(b)        The Sepoy applied for premature release from the Army for which his application was duly processed. The AMC Records, considering his limited service, advised counseling of the individual before taking the final decision. After the counseling, the individual changed his mind and decided to continue in service. He however, sought posting to a ‘field’ location.

(c)        Subsequently, while still at MH Ranikhet, he, while on duty at the ICU, refused to obey instructions of Duty Nursing Officer to clean ‘bed pan’ of a bed-ridden patient at the hospital. It is to be noted that the task which he refused to perform, was a mandated task of his trade of Housekeeper. For this act of indiscipline, the Sepoy was awarded Seven Days Imprisonment within the Unit.

(d)       Subsequent to his release from confinement, while on leave in January 2016, the individual submitted written complaints to the PM, RM and Director General of Medical Services, Army (DGMS-Army) against CO MH Ranikhet and OIC Section Hospital Haldwani. The complaints were independently investigated through a ‘One-Man Inquiry (OMI)’ and were found to be baseless. A Staff Court of Inquiry by the Formation HQ also found him blameworthy for having violated the established Chain of Command and laid down Chain of Correspondence. He was tried summarily for this act of indiscipline and awarded 14 Days Pay Fine.

(e)        As per his request, the individual was posted to a MH in ‘field’ (Leh) and dispatched on posting on 27 February 2017. The individual is currently in transit to his place of posting.

3.         It must be noted that the individual has never been employed as ‘Buddy’ of any officer or JCO nor has he ever been asked to perform such a duty. His allegations related to this and ill-treatment of jawans by superiors, are false and baseless.

4.         It may also be noted that even in an earlier instance of a jawan putting allegations through a video uploaded on Social Media, of ill-treatment of ‘Buddies’, the said jawan also had never ever been employed as ‘Buddy’ of any officer or JCO in his 15 years service. The media must, therefore, verify the factual information from Army before going public on such issues that cast defamatory allegations on the institution of Indian Army.

5.         The operational and professional effectiveness Indian Army which rests on bedrocks of discipline, trust and spirit de corps cannot be diluted based upon false and non-existent perceived grievances and misdemeanors of a few.