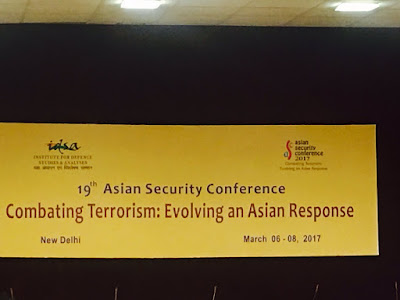 New Delhi: Commenting on Asia’s pivotal role in combating terrorism, Raksha Mantri, Shri Manohar Parrikar today said that a strong regional push from Asia will exert more pressure on the rest of the world to adopt a cohesive framework to fight terrorism.

The Minister was delivering the inaugural address at the 19th edition of the Asian Security Conference on ‘Combating Terrorism: Evolving an Asian Response’, at the Institute for Defence Studies and Analyses (IDSA), on March 6, 2017.

Describing terrorism as a ‘transnational threat’, the minister said that the response to this threat is generally local and uncoordinated, largely due to conflicting definitions of terrorism and geopolitical constraints, which have stymied a global response.

A successful combat against terrorism requires a holistic approach, noted Shri Parrikar. Tackling of terror finance and countering the misuse of the internet through social media by terrorist entities are important steps in this process, he added.

Also speaking in the occasion was His Excellency Mhd. Hanif Atmar, National Security Advisor, Afghanistan. Describing security and counter terrorism as the ‘most defining challenge of our times’, the NSA in his keynote address, called for the need for strong counter-terrorism strategy, with proposed actions at four levels – global, the Islamic world, regional and national.

Cautioning that such strategy would be a ‘generational challenge’, requiring long-term planning, the Afghan NSA insisted that its objective should be to end State sponsorship of terrorism by initiating coordinated political, strategic and military responses to destroy the flourishing sanctuaries for terrorist groups.

Terming international accountability as a prerequisite to counter terror, the NSA laid equal emphasis on the need for appropriate action at the national level through good governance, education, and infrastructure building.

Dispelling the perception of terrorism being associated with Islam as unethical and unhelpful, the NSA insisted that the Muslim nations have lost more lives to extremism and terrorism than other nations. The Muslim nations are natural allies in the war against terrorism, he added.

Insisting that the narrative of distinguishing between good and bad terrorists should be stopped, His Excellency Atmar pointed out that such distinction helps a perpetrator organisation disguise itself as a victim and morphing itself into a Frankenstein monster.

He further noted that Afghanistan is not confronted with a civil war, but a terrorist war, and an undeclared State to State war.

IDSA’s flagship event, the Asian Security Conference has emerged as an important platform for debating issues relating to Asian Security. For the last ten years, the ASC has been providing a forum for security analysts, practitioners and policy makers from around the world to share their views on the challenges facing the Asian continent.

New Delhi: Advocating strongly for the need for security and economic prosperity for all in West Asia, Ambassador Hossein Sheikholeslam, Advisor to Foreign Minister, Islamic Republic of Iran, in a Special Address today blamed socio-economic imbalances for political uncertainty in the region.

Ambassador Sheikholeslam was speaking on the second day of the 19th Asian Security Conference on ‘Combating Terrorism: Evolving an Asian Response’, at the Institute for Defence Studies and Analyses (IDSA), on March 7, 2017.

Insisting that West Asia has been a victim of Western arrogance and colonial intervention for years, he said that continued meddling is the root cause of political conflicts in the region. Cohesive socio-economic development of the entire region is the only way to establish peace, he added.

Commenting on Syria, The Ambassador said Iran and Syria share a common political and strategic outlook and it is the people of Syria who must decide their own future. On Afghanistan, he said Iran’s relations with Afghanistan are founded on very close cultural and historic ties.

Speaking on West Asia and Caucuses, other speakers at the conference highlighted the clash of interests of powers involved in the 'New Great Game' for influence in Central Asia, and large-scale drug trafficking along the northern transportation route from Afghanistan to Russia, as chief causes of instability in the region.

They unanimously urged the international community to agree on common denominators for formulation of a single counterstrategy for violent extremism. The speakers agreed that political communities should try to reach out to the nations and ethnic sections that are potentially prone to radicalisation.

Citing external interventions as one of the major causes for increasing radicalisation of youth and terrorism in the region, the experts called for greater regional and international cooperation for the systematic eradication of religious extremism.

Speaking on the rise of Da’esh as an unprecedented event in the geopolitics of the West Asian region, the experts noted that the terrorist outfit has challenged the existing regional political order by trying to redraw boundaries in the volatile region. Even if defeated, its surviving fighters could go underground, return to their countries of origin, and mutate into another radical organisation.