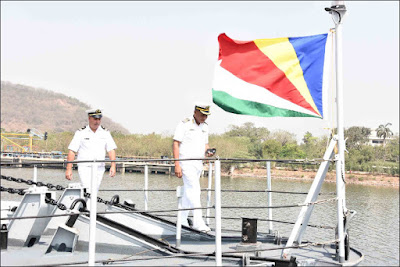 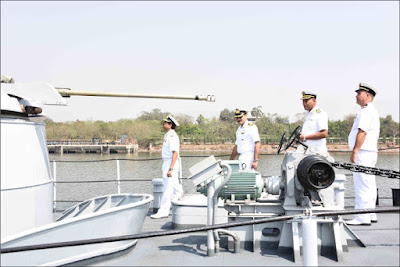 The event commenced with the introduction of the Officers and Crew of SCGPS Topaz to Colonel Simone A Dine Commander Seychelles Coast Guard and Rear Admiral Narayan Prasad ASD(V). Commodore IB Uthaiah, General Manager (Refit) gave a brief account on the progress of refit which was followed by an address by Lieutenant Lyndon Lablache Commanding Officer SCGPS Topaz. The event concluded with customary exchange of crests between the dignitaries and a walk around of the ship. This event marked the culmination of the refit of SCGPS Topaz undertaken by the Indian Navy as a diplomatic courtesy to strengthen relations between India and the island nation of Seychelles in the Indian Ocean.

SCGPS Topaz arrived in India last year during the International Fleet Review at Visakhapatnam and subsequently commenced her refit programme. Various upgrades in machinery, equipment and habitability were undertaken as part of the refit. The ship is now fitted with latest navigation, communication and weaponry to enhance performance of the ship in the years to come. The refit spanned over 11 months with Naval Dockyard, Visakhapatnam upgrading the equipment of the ship in every aspect to make it a potent force in the arsenal of Seychelles Coast Guard.

SCGPS Topaz, former INS Tarmugli was gifted to the Govt. of Seychelles by India in 2005 to strengthen the strategic partnership between the two nations and work together to ensure the safety of the Indian Ocean Region. The ship, used as a patrol vessel by Seychelles Coast Guard is a Fast Attack Craft which served the Indian Navy from 2001 to 2005 before being handed over to Seychelles.