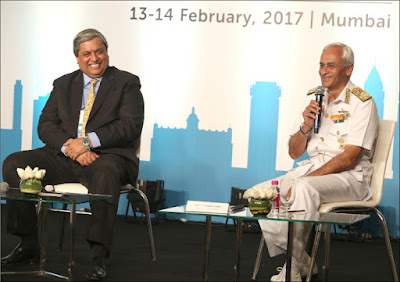 As a part of The Gateway of India Geoeconomic Dialogue, Admiral Sunil Lanba, PVSM, AVSM, ADC, Chief of Naval Staff, made a Special Address on the subject ‘Indo-Pacific: Possibilities and Portents’ on 14th Febuary 2017. The Geoeconomic Dialogue was organised by Gateway House, a think tank, in collaboration with the Ministry of External Affairs, Government of India. In his address, he outlined the significance of Indo-Pacific region by laying out the peculiarity of the region in terms of conflict, population density (60% of the world population), peculiarity of maritime trade routes, availability of natural resources, and economic rise of the region (fastest growing economic region in the world).

Admiral Sunil Lanba said that the region is confronted with both traditional and non-traditional maritime challenges. Unresolved sovereignty issues, territorial disputes, contradicting positions on international norms, maritime muscle flexing and general militarization are issues of traditional challenges in the region, he added. Speaking on non-traditional threats such as piracy and maritime terrorism, he said that any disruption of trade in the region will have an adverse effect on both regional as well as global economy.

Laying out the country’s viewpoint as far as the region is concerned, Admiral Sunil Lanba said that the country is charting its course of economic growth using a civilizational ethos of Realism, Co-existence, Cooperation and Partnership. In achieving this role, he said that, Indian Navy will continue to be ‘Net security provider’ in the Indian Ocean Region. He elaborated that, to achieve these goals Indian Navy has taken a number of initiatives, such as Humanitarian Assistance And Disaster Relief (HADR) operations, anti-piracy operations, Indian Ocean Naval Symposium (IONS) and resource sharing with other navies in Indian Ocean.

In his concluding remarks, he said that India’s economic growth and our aspirations of empowerment of our masses would be adversely effected by any disruption of peace and stability in the region. Thus, India’s and Indian Navy’s Maritime Strategy is built on strategic deterrence, maritime cooperation and capacity building.

He hoped that the Indo-Pacific region emerges as a ‘region of opportunities’ and assured the audience that the Indian Navy will do its utmost to play its role as India’s maritime power and over come the portents to the extent feasible.