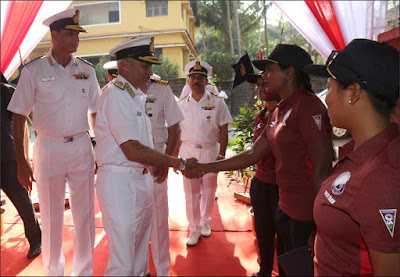 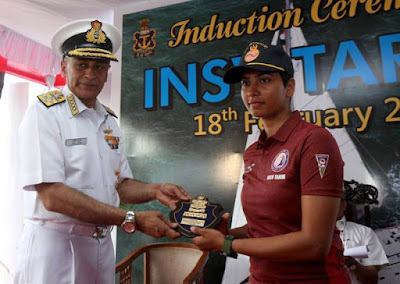 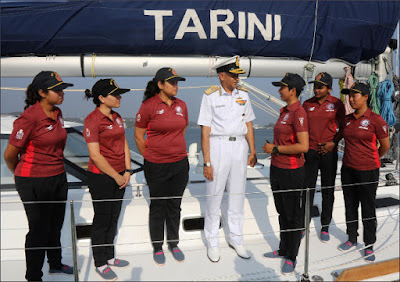 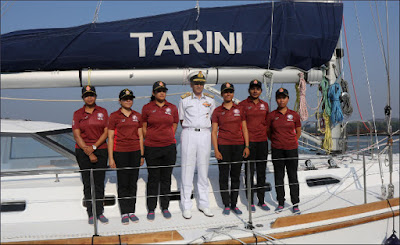 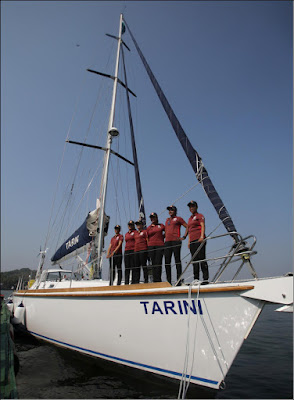 The Indian Navy’s second ocean going sailboat Tarini was inducted, in presence of host of dignitaries at a glittering ceremony at INS Mandovi Boat Pool. Admiral Sunil Lanba, Chief of Naval Staff along with other senior Naval Officers was also present on this historic occasion to wish the boat and her crew success in their endeavors.  INSV Tarini is a sloop built by M/s Aquarius Shipyard Pvt Ltd at Divar, Goa. The sail boat Tarini is being inducted into the Navy and is slated to be the platform for First Indian All Women Circumnavigation of the Globe expedition of the Indian Navy.

During the ceremony, Admiral Sunil Lanba announced that the extremely challenging expedition by her All Women Crew is slated to commence in August 2017. Talking about the women crew, he said that the team has logged over 10,000 Nautical Miles on INSV Mhadei, including a voyage from India to Mauritius and back and Goa to Cape Town braving through rough monsoon seas and heavy wind.

The dignitaries had a visit to the boat and were briefed on its advanced features, including improvements, based on experience of operating INSV Mhadei, which have been incorporated.   On completion of the ceremony, the crew sailed the boat out of harbour displaying its agile handling capabilities.

The keel of the vessel was laid on 27 March 2016 at the Aquarius Shipyard. The construction was diligently overseen by the Warship Overseeing Team, Goa and the vessel is being delivered before the scheduled date of delivery by the boat builder. Extensive trials of the newly built INSV Tarini were successfully completed on 30 January 17.  The boat is skippered by Lieutenant Commander Vartika Joshi and crew members include Lieutenant Commander Pratibha Jamwal, Lieutenant Aishwarya Boddapati, Lieutenant Patarapalli Swathi, Lieutenant Sh Vijaya Devi and Lieutenant Payal Gupta.

Indian Navy will is operating four sailing vessels capable of open ocean deployments, that is, Tarangini, Sudarshini, Mhadei and Tarini, all four of which have been built in shipyards at Goa. Indian Navy is attempting to revitalise open ocean sailing and will also be inducting four 40 feet, state of the art open ocean racing sail boats. 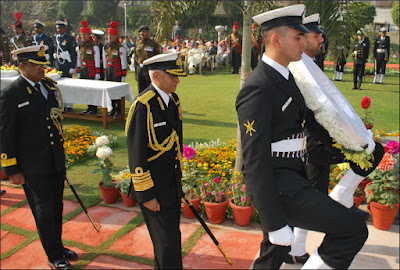 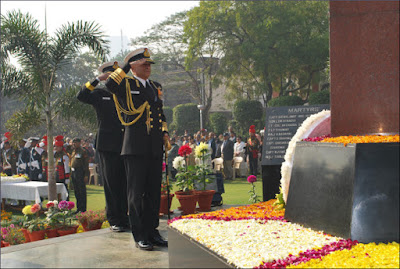 Admiral Sunil Lanba, PVSM, AVSM, ADC, Chief of the Naval Staff paid homage and laid wreath at the ‘Shaheed Smarak’ this morning at a solemn function organized by the Noida Sanstha. While speaking on the occasion, the Chief of the Naval Staff stated that it was indeed an honour for him to pay tributes to these soldiers, airmen and sailors. He also took the opportunity to assure the families of these brave souls that the Armed Forces shall continue to steer firmly on the path shown by them in ensuring security of our seaward and landward frontiers.
The function was attended by a large number of civil and military dignitaries, IAS and IPS officers, ex-servicemen, school children and common citizens who came together to pay homage to our immortal martyrs.

The greatness of any nation is reflected by the tribute its citizens pay to the Valiant Armed Forces Personnel who had made the supreme sacrifice for the safety and security of our Motherland. The ‘Noida Shaheed Smarak’ is one such unique Tri- service memorial raised by the Noida township which is keeping the memories and spirit of our martyrs alive.

The idea of setting up such a War Memorial to honour Martyrs was conceived in 1998.The existing Memorial is an eloquent tribute and homage to all those armed forces personnel whose ultimate sacrifice led to several decisive victories since independence. Today Noida Shaheed Smarak (NSS) is an iconic landmark, which not only keeps the memories of these brave hearts alive and serves as a source of inspiration for coming generation but is also for expressing of our eternal gratitude to those who made the supreme sacrifice so that we may see a better a tomorrow. Every year NSS Sanstha organizes Annual Wreath Laying ceremony in the month of February to pay homage to our Martyrs.
The apt tribute to the war Heroes truly instilled great sense of pride in the hearts of all those present on the occasion.