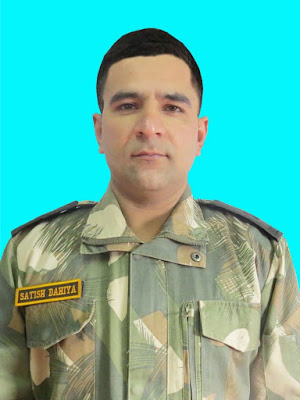 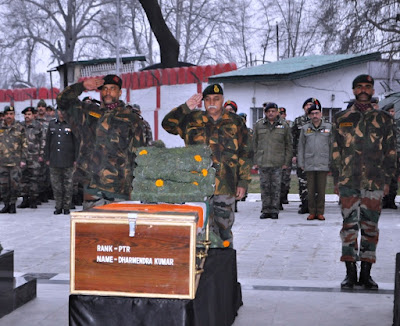 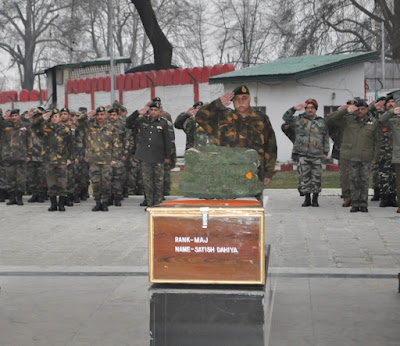 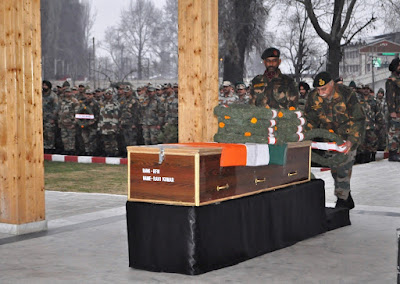 The Army today paid homage on behalf of a proud nation to four of its gallant soldiers who embraced martyrdom in two different operations in Kashmir on 14 Feb 2017 during which four terrorists were eliminated.

Joined by officials from the other Security Forces operating in the Valley, the Chinar Corps Commander Lt Gen JS Sandhu paid rich tributes to Major Satish Dahiya, Rifleman Ravi Kumar, Paratrooper Dharmender Kumar and Gunner Astosh Kumar in a solemn ceremony in BB Cantt, Srinagar.
Survived by his wife and a two year old daughter, the 31 year old Maj Dahiya had lead the operation launched by Army in Handwara yesterday which eventually resulted in the elimination of three terrorists thus delivering a major blow to the terror network in North Kashmir. The officer had been part of several counter terrorist operations and had also been awarded for gallantry earlier. He hailed from Mahendergarh, Haryana.
A true son of the soil, 33 years old Rifleman Ravi Kumar hailed from Samba in J&K and was part of another  operation in Hajin, Bandipur on 14 Feb 17 in which one terrorist was killed. He is survived by his wife and a three years old daughter.
Also forming part of the same operation was Ptr Dharmender Kumar of Nainital, Uttarakhand. The young paratrooper, who defied his 26 years of age and had established himself, amongst his comrades, as a spirited and daring soldier, is survived by his parents.
Patriotism and sense of sacrifice ran in the blood of Gnr Astosh Kumar whose father Hav Lal Sahib had also laid down his life during the Kargil war in 1999 when he was barely a seven year old child. His father’s sacrifice only strengthened his resolve to join the Army which he did at the tender age of 19 years. The martyr hailed from Jaunpur, UP and is survived by his mother, Smt Shila Devi.

The mortal remains of the martyrs will be taken to their native places for last rites with full military honours.  The Army stands in solidarity with the bereaved families and remains committed to their dignity and wellbeing.