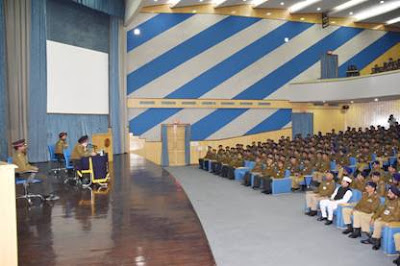 Defence Security Corps (DSC), which was raised on 25 February 1947 as ‘Defence Department Constabulary’, celebrated its 70th Raising Day on 25 February 2017. DSC troops have been providing security to various sensitive defence and civil installations across the length and breadth of the Country since 1947.

On the occasion of the 70th Raising Day, Lieutenant General JS Cheema, Deputy Chief of Army Staff (Information System & Training) and Colonel Commandant of DSC, congratulated all ranks and complimented them for their relentless efforts in guarding sensitive Defence and civil establishments. On this solemn occasion, he also remembered the supreme sacrifices made by the martyrs of the Corps, exhorted all ranks to seek inspiration from their valour and felicitated eight Junior Commissioned Officers and Other Ranks for their distinguished service. So far, DSC has been awarded three Vir Chakras, one Kirti Chakra, four Shaurya Chakras, ten Sena Medals, two Vishisht Seva Medals and fifteen Chief of Army, Air and Naval Staff Commendation Cards.