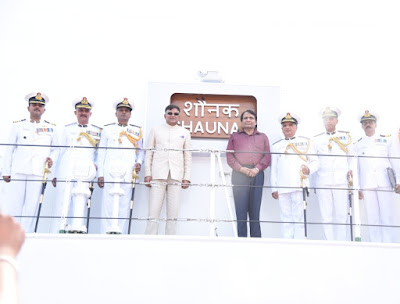 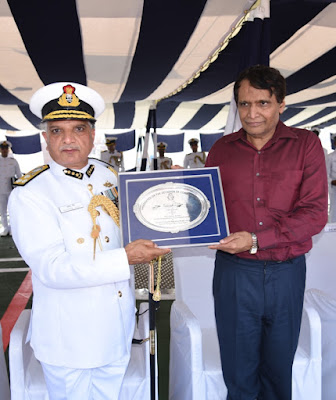 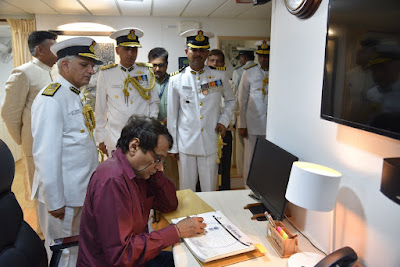 Indian Coast Guard Ship “Shaunak” the fourth ship in the series of six Off Shore Patrol Vessels(OPV) was commissioned at Goa by Shri Suresh Prabhu, Hon’ble Minister for Railways on 21 Feb 17 in the presence of Director General Rajendra Singh, PTM, TM, Director General Indian Coast Guard, CMD Goa Shipyard Limited and other senior dignitaries of the Central and State Government.‘Shaunak’ meaning ‘Wise’ is a projection of Indian Coast Guard’s will and commitment “To serve and protect” the maritime interest of the nation.

The ship draws 2500 tons(GRT) propelled by two 9100 KW diesel engines to attain a maximum speed of 26 Knots and has an endurance of 6500 NM at economical speed. The sustenance and reach coupled with the latest and modern equipment and systems, provides her the capability to perform the role of a command platform and accomplish all Coast Guard charter of duties.

The ship on joining Coast Guard Fleet will be based at Visakhapatnam and deployed extensively for EEZ surveillance and other duties as enshrined in Coast Guard Charter, to safeguard the maritime interests of India. Presently, Indian Coast Guard has a Fleet of 127 Ships/boats, 85Ships/boats are at various stages of construction at different shipyards. With the commissioning of this vessel and other assets, the Indian Coast Guard will emerge as a stronger and potent force to address the emerging security challenges in maritime zone of India.

ICGS Shaunak will be commanded by Deputy Inspector General T Sashi Kumar and manned by 14 Officers & 98 men. The ship will be under the administrative and operational control of the Commander, Coast Guard Region (East).

The commissioning of ICGS Shaunak will enhance the Indian Coast Guard’s operational capability to discharge the multifarious maritime tasks. The induction of a sophisticated and state-of-
the-art Offshore Patrol Vessel will give a fillip to the maritime protection of our vast coastline of
Eastern Seaboard in general and the Maritime States of Eastern Region viz Andhra Pradesh and Tamil Nadu in particular.