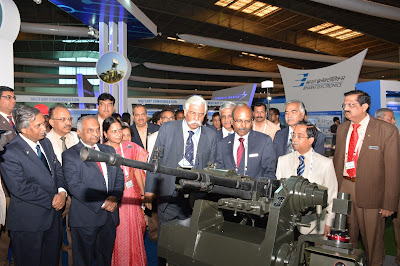 The RCWS is an improvised version of the manually operated air defence gun. It enables the soldier to aim and fire at aerial targets from the safe interiors of the battle tank. Presently, the 12.7 mm guns of all tanks are manually operated. RCWS integrated on MBT Mk II has successfully completed tank integration and firing trials in September 2015. RCWS has also been developed for use in Armed Repair and Recovery Vehicle (ARRV). It can also be mounted on hovercraft / fast moving boats for the Coast Guard.

The RCWS for MBT ARJUN Mk II is intended to lay and stabilise the NSVT 12.7 mm machine gun along with the optical sensors in traverse and elevation mounted on the MBT turret. The system allows the operator to control the gun and sight from the operating console and joy stick from inside the turret.  The optical sensors include a day camera, Thermal Imager and a Laser Range Finder integrated on a single housing. The system allows automatic target tracking for air and ground targets and performs necessary ballistic computations to feed the ballistic offsets to the gun / sight. The system has a provision for the operator to do automatic loading and firing of the gun.

The system can operate on power mode without stabilisation or in stabilised mode where the gun along with the optical sensors is stabilised. The system can position the turret with an angular travel of 360 deg and elevate the gun in 60 to -5 degree elevation. The sight has a freedom of +/- 17 degree in azimuth and in elevation it can move from -5 to +60 degree.  It operates from the 28V DC power source available on the tank. The RCWS meets all environmental specifications and EMI specifications as per MIL STD 461 F.