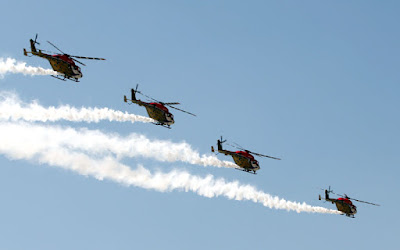 To mark the successful conclusion of the Aero India 2017 and to serve as a token of remembrance of fruitful association over the last few days during the airshow, the aerobatic display teams got together today. Posing in front of the Grumman G-164 A of the Scandinavian team and the Yak-50 of the Yakovlev team, stunt pilots of the Surya Kiran Aerobatic team (SKAT), the Yakovlevs and the Scandinavian along with their three ‘skycats’ provided for a visual treat. The SKAT pilots, led by Wg Cdr Ajit Kulkarni, looked resplendent in their red flying overalls. The Scandinvan leader Jacob Hollander’s flying suit matched the colour of his flying machine while the skycats placed themselves atop the yellow and blue airplane for photographs. The Yakovlev pilots, led by Jez, in their black flying suits gave a very professional look. After the ‘photo session’ the SKAT daredevils met up with the spectators to shake hands and distribute memorabilia.

Curtains came down on the Aero India – 2017 at Air Force Station Yelahanka in Bengaluru today. Having evolved over the years, the 11th edition of the event went through smoothly without a glitch drawing unprecedented crowds that bear testimony to the premier Air Show of Asia having come of age.

The highlights of this year’s show have been:


The first three days at the show, earmarked exclusively for business visitors saw a foot fall of approximately 1.5 lakh. The air show saw a lot of activity from business point of view and witnessed several round table meets. The show was a success.

The push that the show gives to the ‘Make in India’ campaign of the Government of India by virtue of its sheer magnitude and presence of stake holders from across the globe cannot be over emphasized.

The awe-inspiring manoeuvres by various types of aircraft and formations enthralled the audience – young and old alike, every single day.  The flying displays went smoothly with immaculate precision painting a colourful aerial symphony in the clear Bengaluru skies twice every day.

The last two days at the event saw an unprecedented foot fall of approximately four lakh people swarming in to the venue   to catch a glimpse of their heroes in their magnificent flying machines.

The Directorate of Public Relations, Ministry of Defence, empowered by their recent forays into the social media, with their consistent efforts ensured timely updates and wide outreach to enthusiasts around the globe. 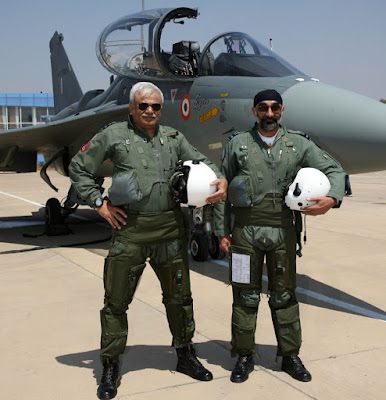 The Vice Chief of the Air Staff, Air Marshal S.B. Deo and the Air Vice Marshal A.P. Singh after a sortie of the indigenously developed Light Combat Aircraft (Tejas), during the Aero India 2017, at Air Force Station, Yelahanka, in Bengaluru on February 18, 2017.