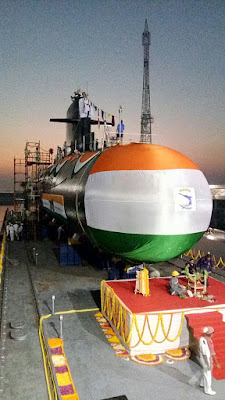 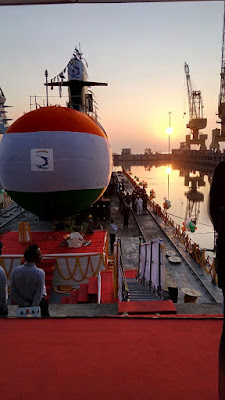 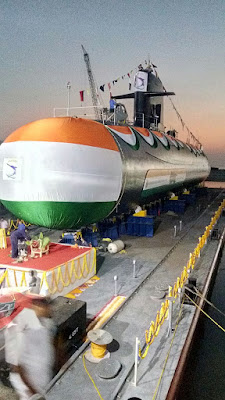 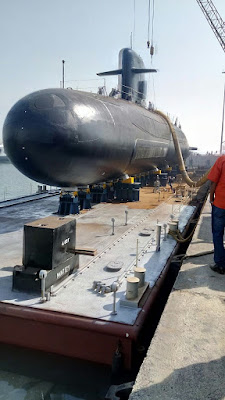 Khanderi, the second of Indian Navy’s Scorpene’ class stealth submarine, was ‘launched’ today by the Hon’ble Raksha Rajya Mantri, Dr Subhash Bhamre paving the way for her sea trials. Admiral Sunil Lanba, Chief of the Naval Staff and a host of other dignitaries witnessed the launch at Mazagon Dock Shipyard Limited today.

The submarine is expected to be delivered to Navy by the year end. She has been christened after her illustrious predecessor, an erstwhile ‘Foxtrot’ class submarine decommissioned in 1989, which is as per the traditions of Indian Navy. The construction of six Scorpene submarines is presently being progressed at Mazagon Dock Shipyard Limited (MDL), under Project 75 with Transfer of Technology from M/s DCNS, France as the Collaborator. The first of the class submarine, Kalvari is presently undergoing sea trials and likely to be commissioned into Navy by Mid 2017. These submarines, post induction, would form the core of Navy’s conventional Submarine Arm.

Speaking on the occasion Dr Subhash Bhamre said that Project 75 Kalvari is a key milestone in self reliance and indigenisation for the country. Admiral Sunil Lanba, Chief of the Naval Staff said during his address that the fact that Submarine ‘’Khanderi” compares with the best in the world, speaks highly of the experience and expertise our shipbuilders have gained over the years. He added that as Indian Navy celebrates Golden Jubilee of the submarine arm in 2017, the induction of Project 75 submarines would mark the beginning of a new chapter in our submarine capabilities.

The launching of Khanderi also marks a critical milestone event for the Shipyard which earlier has delivered two Shishumar class submarines in the 90’s and has now strengthened its position as a submarine building yard for Indian Navy. Started as a small dry dock facility for East India Company, MDL today has established itself as a forefront Defence Public Sector Undertaking, with indigenous construction of several ships and submarines for Navy such as P 15 B Destroyers and P 17 A class stealth Frigates being the latest.