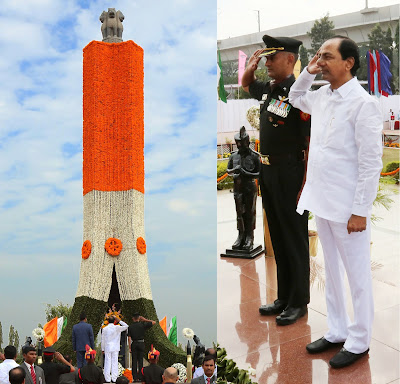 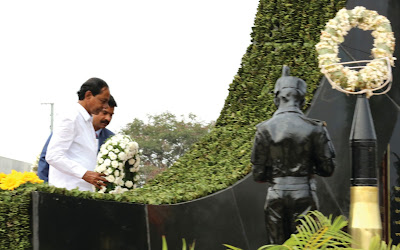 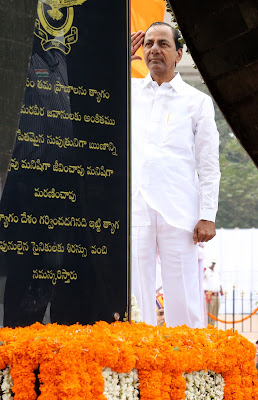 Wreath laying ceremony is organised every year at Veerula Sainik Smarak, Army Parade Ground, Secunderabad by Headquarters Telangala & Andhra Sub Area along with the Republic Day Parade as a mark of respect and to pay homage to the valiant soldiers who laid their lives to uphold the honour and pride of our country.  As we rededicate ourselves to uphold the constitution and fulfil the unrealised dreams of vibrant India rightly said “they sacrificed their `today’ for a safer `tomorrow’ for us”. 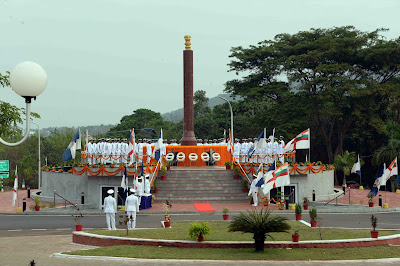 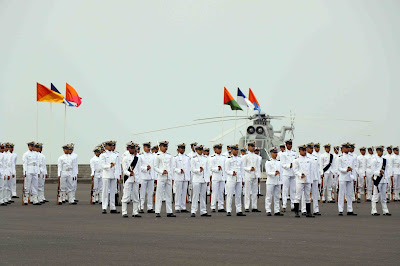 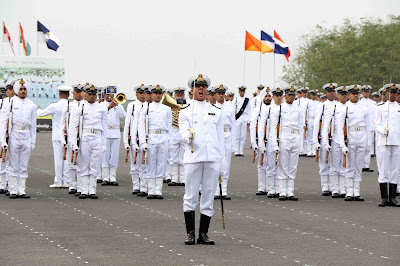 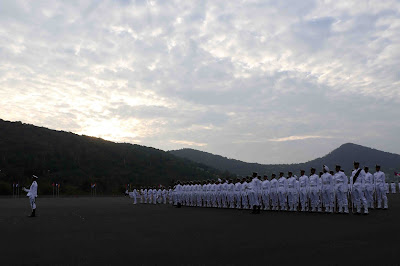 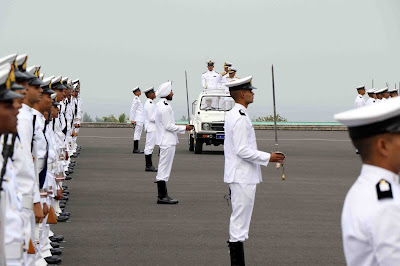 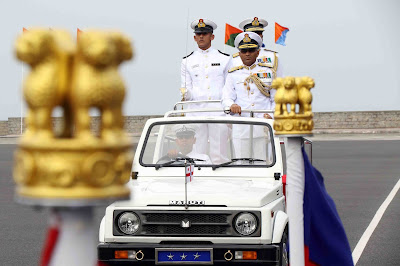 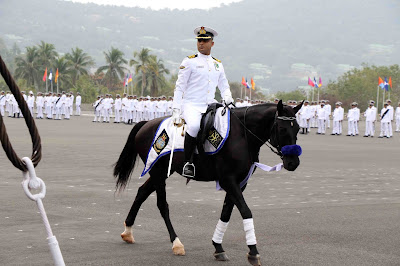 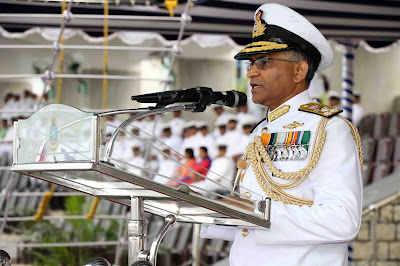 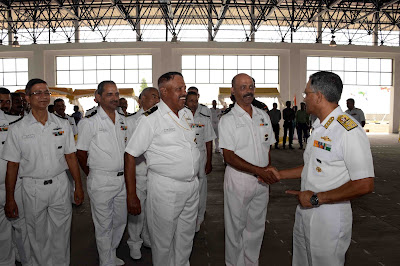 During his address, the Commandant greeted the attendees on the auspicious occasion and motivated the cadets to work towards professional excellence and pride. He reiterated that professional knowledge and competence are absolutely necessary traits that every aspiring military leader must possess. He urged all personnel of the station to rededicate themselves to the cause and serve the nation. He advised all personnel to discharge their duty responsibly and continue to make the Navy and the country proud.

The parade culminated with the march past by the platoons. The families and children of all personnel of INA witnessed the impressive parade. A station get together and ‘Barakanna’ - a traditional meal for all Naval and Defence civilian personnel of the station was also organised as part of Republic Day celebrations.

On 11 Jul 16, Sqn Ldr Ramesh Verma was authorised for a battle inoculation mission, by Dark Night. While carrying out the attack profile, the front canopy of the aircraft burst with a loud bang. Sqn Ldr Verma was hit by large pieces of canopy Perspex with great force on his neck, resulting in deep wounds and injury to his right shoulder. The severe wind blast also caused his head to hit the canopy combing, almost rendering him unconscious. Sqn Ldr Verma was quick to regain control of the aircraft using his instincts. His vision had become hazy due to the strong blast of wind and possible fine powder from the bursting canopy fragments, in his eye. There was also no communication possible either with his rear seat WSO (who was not a pilot), or with any ground agency. The aircraft was very close to Bareilly town and an ejection would have resulted in catastrophic damage on ground.

Despite a bleeding wound, pain and stiffness in his right shoulder, he lowered his seat, selected the dark visor down and initiated recovery keeping clear of populated area. Lowering of the dark visor was essential to protect his eyes, though it considerably reduced visibility on a dark night. Large pieces of the canopy had also fallen inside the cockpit and could have interfered with the flying controls and the ejection seat. Abandoning the crippled aircraft would have resulted in extensive damage on ground and the loss of a very expensive aircraft. He displayed courage of an exceptional order in deciding to brave the strong air blast inside the cockpit, very hazy vision and grave injuries to his shoulder and arm while recovering the aircraft in a dark night. The courage, resolve, and professional skill displayed by the officer were of the highest order.

In the wee hours of 18 May 16, Indian Air Force received a frantic call from Sri Mata Vaishno Devi Shrine Board informing a forest fire raging on Trikuta hill which was fast approaching the shrine. Squadron Leader SS Multani (Now Wing Commander) was immediately tasked for dousing the fire by the use of Bambi bucket. He immediately swung into action and got airborne for the site. By then, the fire had turned into an inferno and was only 100m from the main walkway to the shrine, endangering the lives of thousands of pilgrims. The fire was spotted on a steep slope surrounded by tall trees making it inaccessible to the fire fighters on ground. Realising the time criticality, with his experience and awareness of the area, he identified the reservoir of Salal Dam at Riasi as a potential source for filling up water. Reduced visibility due to smoke, excessive turbulence and limited turn radius reduced any margin of error as the aircraft had to be operated at its maximum capacity. The alignment of the fire line required the water drop to be carried out in a direction facing into the hill, making it dangerously difficult unlike other fire fighting operations. With the Bambi bucket under slung at 30 m below the aircraft, the terrain clearance was marginal. The complexity of the mission required courage and skillful handling of the helicopter maintaining a high degree of situational awareness.
During the process of dousing the fire the bunch cable holding the Bambi bucket had entangled, thereby making it impossible to fill up the water. Returning to base for rectification would have caused loss of precious time thereby, allowing the fire to spread putting in danger lives of thousands of pilgrims. Sqn Ldr Multani located a restricted but clear patch next to the reservoir and with no assistance available on ground to secure the Bambi, he deftly manoeuvered the aircraft to land safely. Having removed the entanglement personally, he resumed the fire fighting operations with courage and commitment. Accurate and relentless operations were able to douse the fire, preventing a major catastrophe in the Trikuta hills.
For this act of exceptional courage in saving precious lives, Wing Commander Sukhwinder Singh Multani has been awarded Vayu Sena Medal  for Gallantry.

On 12 Mar 2016, Sqn Ldr Vikas Puri was detailed to fly a Mi-17 helicopter from Shillong to Tezpur with AOC-in-C, HQ EAC and other senior officials of his entourage on board. After an uneventful flight of 30 minutes, his aircraft experienced fuel booster pump failure which immediately leads to "rarest of the rare" emergency of "both engine failure" in Mi-17 helicopter. Being at a height of only 4000 feet above in a difficult terrain and with very limited time in hand, he promptly analysed the situation and quickly initiated correct recovery actions. Unaware of the actual cause of failure, displaying exceptional courage, astute technical knowledge, exceptional crew coordination, timely ingenious actions and adept handling of the toughest emergency in a helicopter, he recovered the aircraft safely by force landing the aircraft. Even while losing height critically, he maintained his composure and dexterously manoeuvred the helicopter to safety barely 250 meter above ground level thereby averting a certain catastrophe. In this fearless and courageous effort, he not only saved sixteen invaluable lives but also a precious war waging asset.

He showed exemplary valour, bravery, maturity, exceptional professionalism and situational awareness in tackling one of the gravest emergency in a Mi-17 helicopter.  Squadron Leader Vikas Puri has been awarded Vayu Sena Medal for Gallantry.

On 01 Jun 16, Squadron Leader Rijul Sharma was authorised to fly an Air Test sortie on MiG 29 aircraft which involved testing of aircraft at Supersonic Speeds at a height of 10 Km. While conducting this test in Supersonic Flying corridor; 110 km away from base at a speed of 1.1 Mach which corresponds to 1200-1300 Kmph of true air speed, the canopy perspex of the aircraft shattered. This resulted in explosive decompression and perspex pieces hitting the officer on his right shoulder. In the absence of canopy; he was exposed to  extremely low temperatures of minus 28 deg C and very severe wind blast owing to very high speed. Human exposure to such low temperatures, aero-medical problems of decompression sickness and few seconds to useful consciousness due to Hypoxia required prompt actions on the part of the pilot. Weighing against the option of ejecting and displaying courage of an exceptional order, Sqn Ldr Sharma decided to recover the aircraft.

In the process, he totally disregarded his critical shoulder injury and the discomfort posed by high speed, high altitude and low temperatures. To avoid the effects of aero-medical problems he quickly descended to 3 Km and simultaneously reduced speed for effective control of the aircraft. Displaying concern to other lives and national assets he avoided flying close to oil installations which were enroute and populated areas. Notwithstanding the reduced frontal visibility, very high cockpit noise level and heavy aircraft weight, he skillfully handled the damaged aircraft and executed a safe emergency landing, without any further damage to the aircraft. His actions in handling such a critical emergency, not only saved his own life and the aircraft, but also prevented possible catastrophic damage to en-route strategically important and vital petro­chemical installations and populated areas.