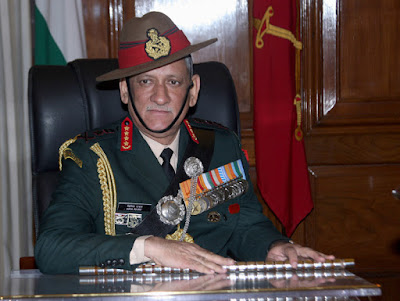 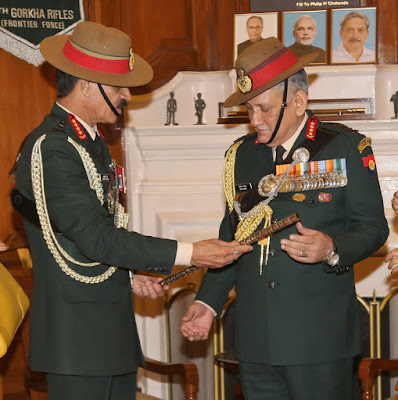 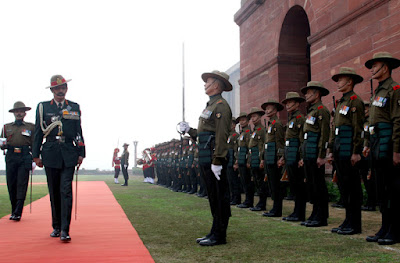 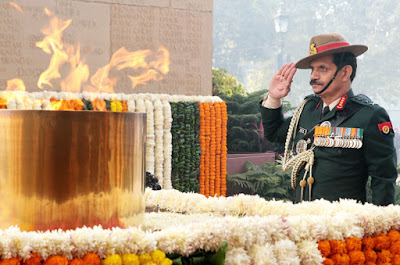 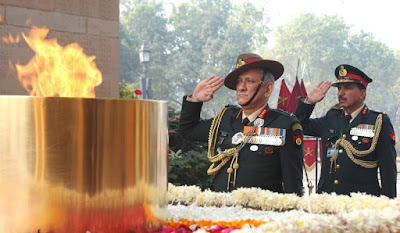 General Dalbir Singh, the Chief of Army Staff, after an illustrious career spanning over four decades, handed over the baton to General Bipin Rawat  in a ceremony held at South Block today. Amongst numerous achievements, the tenure of Gen Dalbir Singh was operationally significant wherein a high tempo of operations was maintained  in J&K and North East. Gen Dalbir Singh laid a wreath at Amar Jawan Jyoti and was accorded a guard of honour  at South Block Lawns prior to relinquishing as COAS.

General Bipin Rawat took over as the 27th Chief of the Army Staff. The General Officer was tenanting the appointment of the Vice Chief of Army Staff (VCOAS) of the Indian Army from 01 Sep 2016.

General Bipin Rawat was commissioned in the Fifth Battalion of the Eleven Gorkha Rifles in December 1978, from Indian Military Academy, Dehradun, where he was awarded the ‘Sword of Honour’.  The General Officer has vast experience in high altitude warfare and counter insurgency operations.  He commanded an Infantry battalion, along the Line of Actual Control in the Eastern Sector; a Rashtriya Rifles Sector and an Infantry Division in the Kashmir Valley, a Corps in the Eastern theatre and the Southern Command. He has tenanted instructional appointments at Indian Military Academy, Dehradun and at Army War College, Mhow.

Lt Gen Bipin Rawat has held important staff appointments at Directorate General of Military Operations and Military Secretary’s Branch at Army HQ.  He has also been Major General General Staff (MGGS) at HQ Eastern Command.  The General Officer commanded a Multinational Brigade, in a Chapter VII mission in the Democratic Republic of Congo (MONUC). Whilst serving with the United Nations, he was twice awarded the Force Commander’s Commendation.

An alumni of Defence Services Staff College, Wellington, the Higher Command & National Defence College Courses, the General Officer, during the span of over       38 years service in uniform, has been awarded for gallantry and distinguished service with the UYSM, AVSM, YSM, SM, VSM, COAS Commendation on two occasions and the Army Commander’s   Commendation.  The General Officer also attended the Command and General Staff College (CGSC) course at Fort Leavenworth, Kansas, USA.

Academically inclined, he has authored numerous articles on ‘National Security’ and ‘Leadership’, which have been published in various journals and publications. He was awarded M. Phil in Defence Studies from Madras University. He has a Diploma in Management and another Diploma in Computer Studies. Lieutenant General Bipin Rawat has also completed his research on military media strategic studies and was awarded Doctorate of Philosophy (Ph.D) from Chaudhary Charan Singh University, Meerut in 2011