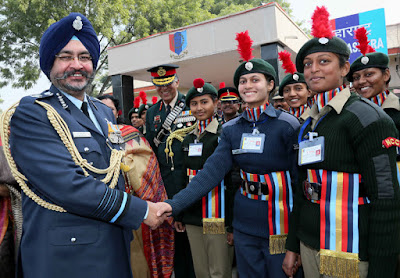 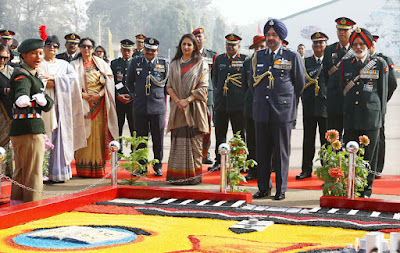 The Chief of Air Staff reviewed a ‘Guard of Honour’ presented by the smartly turned out cadets from all the three wings of the NCC i.e. Army, Navy and Air Force. This was followed by a brilliant Band Display by the cadets.

The CAS also inspected the well laid out flag area prepared by the cadets from all 17 NCC Directorates depicting various Social Awareness themes.  He was given a crisp brief by the cadets on their respective models.

The CAS thereafter, visited ‘Hall of Fame’, a proud possession of NCC with display of rich archival collection of alumni photographs, models, motivational and other achievements of NCC.

The Air Chief along with other distinguished guests later witnessed a  ‘Cultural Programme’ by the talented cadets in the NCC auditorium.

Congratulating the cadets for their captivating cultural programme and soldierly alertness on parade, Air Chief Marshal BS Dhanoa lauded the stellar role played by this premier organization in shaping the youth of our Nation through its motto of ‘Unity and Discipline” enabling them to shoulder the responsibilities of building a strong Nation.