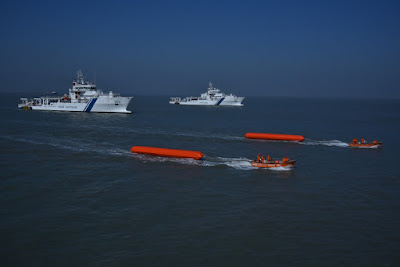 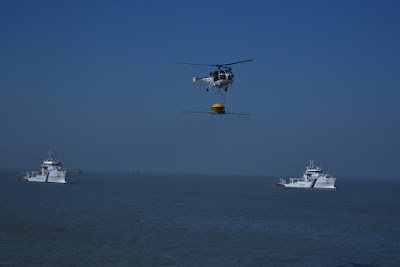 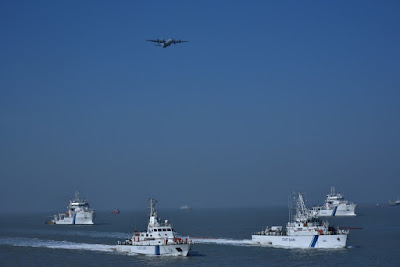 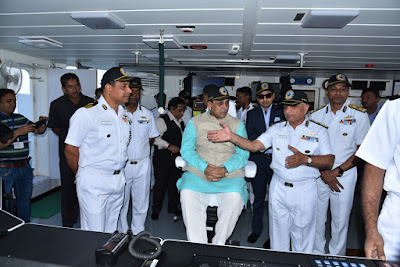 Indian’s energy requirements (approx 70%) are met by oil resource that is being imported into our country by ships. The transportation of oil through sea route is fraught with inherent risks and requires preventive measures to be taken both by the ship owners and the oil receiving facilities inside port.

The Indian Coast Guard is the Central Coordinating Authority for oil spill response and has put into place a robust pollution response system to check the preparedness levels of oil handling agencies at regular intervals. The Gulf of Kachchh houses ecologically sensitive mangroves and coral reefs, which are fraught with danger in case of an oil spill. To address issues relating to an oil
spill, the sixth edition of National Level Pollution Response Exercise (NATPOLREX-VI) was conducted by the Indian Coast Guard on 20-21 Dec 16, off Mundra in Gulf of Kachchh. Representatives of various Ministries and Departments of Central and State Governments, Ports, Oil Handling Agencies and other stake holders participated in the exercise. In addition, representatives of
Oil Industry Safety Directorate and Observers from three foreign nations also witnessed the NATPOLREX-VI exercise. 125 personnel from various agencies/stakeholders participated in the exercise.

The highlight of the exercise was participation of ICG Pollution Control Vessels (PCV) and integration of Air Force into the Oil Spill Disaster Management System for aerial assessment/delivery of oil spill dispersant (OSD) for mitigation of the spilled oil. The NATPOLREX-VI was precluded by a Table Top exercise on 20th Dec 16 for simulation of the situation.

The Indian Coast Guard assumed responsibility of protecting marine environment in her maritime zones on 01 Mar 1986, when these responsibilities were transferred from Ministry of Shipping. Subsequently, the Coast Guard prepared the National Oil Spill Disaster Contingency Plan (NOSDCP) for combating oil spill disaster at sea, which was approved by the committee of secretaries in the 1993. The Indian Coast Guard has also established three Pollution Response Centres at Mumbai, Chennai and Port Blair and has the capability to respond to oil spills up to 10,000 tones with assistance of various agencies.

Shri Vijaybhai R Rupani, Hon’ble Chief Minister of Gujarat reviewed the preparedness of all agencies during the exercise on 21 Dec 16 from onboard Coast Guard Ship Sarathi along with Director General Rajendra Singh, PTM, TM, the Director General Indian Coast Guard.