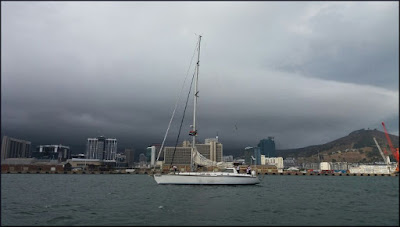 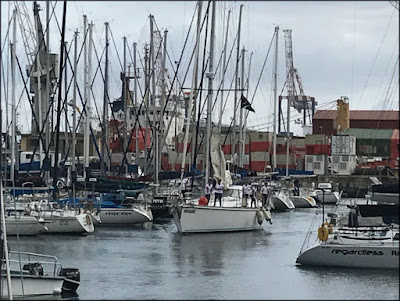 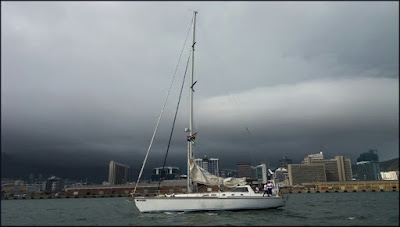 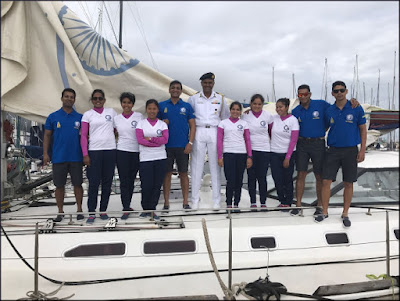 The Indian Navy’s ocean-going sail boat Mhadei with an all-women crew, entered Cape Town Harbour today after a grueling voyage which started from Goa in early November 2016. The boat shall be participating in the “Cape to Rio 2017” race held by the Royal Cape Yacht Club (RCYC), Cape Town.

The six lady officers’ onboard Mhadei skippered by Lieutenant Commander Vartika Joshi have been handpicked by the Indian Navy and groomed for this challenge. They are being trained in the various aspects of Ocean Sailing at the newly set up Ocean Sailing Node at Goa headed by Capt Atool Sinha, an Asian Games Silver medalist who will also skipper the boat from Cape Town to Rio at the Cape to Rio Race 2017.

Having steadily increased their sea legs this year, these women have completed a 2000 nautical miles voyage from Visakhapatnam to Goa in India in February 16 before doing their first ocean crossing of 4000 nm from Goa to Mauritius and back in July 16. The current voyage from Goa to Cape Town conducted for 45 days and 5000 nm through heavy weather have been their longest leg as yet and an important milestone in their circumnavigation aspirations.

The crew comprising Lieutenants Swathi, Aishwarya, Pratibha, Vijaya and Payal respectively, in addition to the Skipper Vartika are from diverse backgrounds and they are Naval Architects, Air Traffic Controllers and Education Officers by profession. The passion of Ocean Sailing unites them all. Their grit, determination and courage is an inspiration to all Indians and is a testimony to the women empowerment in modern India. This crew is set to attempt the first Indian all women circumnavigation of the globe in 2017.

The boat, custom built in Goa, derives her name from a deity revered by sea farers. Since her commissioning in 2009, Mhadei has logged over 105,000 nautical miles of Ocean Sailing, most of which has been through the remotest parts of the planet. She has crossed the Equator Thirteen times, Prime Meridian Six times and the International Date Line twice.

From Cape Town, the boat leaves for Cape to Rio Race on 1st of January.