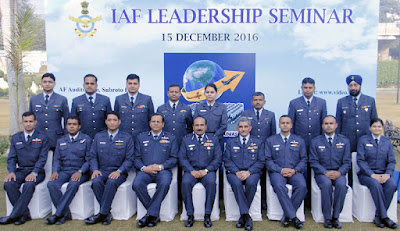 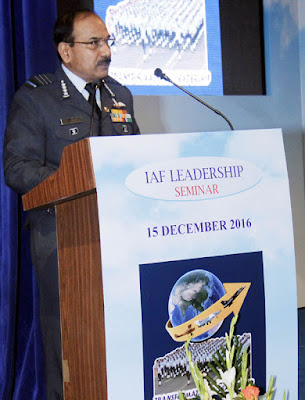 The Chief of the Air Staff, Air Chief Marshal Arup Raha addressing the Air Warriors during the IAF seminar on Transformational Leadership, in New Delhi on December 15, 2016.

Air Marshal B Suresh AVSM VM, AOP, while delivering the welcome address brought out significance of the series of seminars, he said "Leadership is bedrock of all military and organizational capability". In an era that has seen societal and technological changes at an unprecedented pace, especially during the last decade, these seminars have made significant contribution by highlighting the contemporary issues and challenges facing the organisations. This year’s topic on Transformational Leadership is continuation of the series. "Transformation being a necessity today, than a desire", said the Air Officer. He brought out that the seminars have helped bringing about several changes and policy directions to evolve the leadership dynamics in the IAF.

The seminar yesterday, saw fourteen speakers of the rank of Squadron Leader and below speak on the topic in three separate sessions. Over fifty IAF stations were able to participate through videoconferencing using the AFNET platform. The participants interacted in realtime, making the seminar enriching and meaningful. Squadron Leader J Simon an Flying Officer Taneesha Chowdhary were adjudged as the ‘Best Speaker’. Sergeant T Mathew was adjudged the first runners up. Rolling trophy for best Command Team was awarded to Western Air Command. The DCAS, Air Marshal RKS Bhadauria AVSM VM gave away the awards.