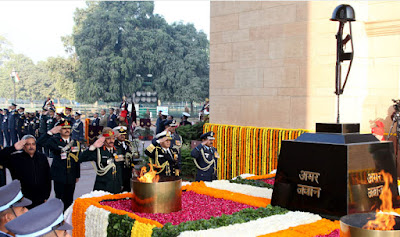 The Union Minister for Defence, Shri Manohar Parrikar along with the Chief of Army Staff, General Dalbir Singh, the Chief of Naval Staff, Admiral Sunil Lanba and the Chief of the Air Staff, Air Chief Marshal Arup Raha paying homage to the Martyrs of 1971 War, at Amar Jawan Jyoti, India Gate, to mark the ‘Vijay Diwas’, in New Delhi on December 16, 2016.

The Eastern Naval Command observed the 45th anniversary of Vijay Diwas on 16 December 16,  by paying tributes to the valiant personnel of the Armed Forces who made the supreme sacrifice in various Operations including the 1971 War.  A Floral wreath was placed at the ‘Amar Jawan Jyoti’, the Navy War Memorial on RK Beach this morning by Vice Admiral Atul Kumar Jain, AVSM, VSM, Chief of Staff, Eastern Naval Command. Wreaths were also placed by Vice Admiral VK Namballa (Retd), President Navy Foundation and Shri T Yoganand, Commissioner of Police, Visakhapatnam. Rear Admiral Eduard Mikhailov, Deputy Chief of Flotilla, Pacific Fleet on a visit to Visakhapatnam to participate in Indra-Navy Bilateral Exercise also placed wreath and paid homage to the martyrs. A 50 man Guard was paraded at the venue and a two-minute silence was observed as a mark of respect to the martyrs.

The Defence Services across the country celebrate Vijay Diwas on 16th December every year to commemorate the historic victory against Pakistan in 1971 War. On this momentous day, the Pakistani Forces under the command of Lieutenant General AAK Niazi surrendered at Dhaka, in the presence of the three tri-service theatre Commanders of Indian Armed Forces. It was on this in 1971, that a declaration of cease-fire was brought into force ending the Indo-Pak War and resulting in the birth of the sovereign country of Bangladesh.