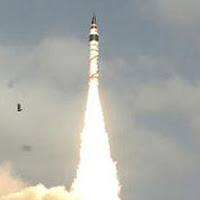 Agni-5 India's intercontinental, nuclear-capable missile, test fired off Odisha coast this morning, from Kalam Island. This is the most advanced  and the longest range indigenous Indian missile developed by DRDO. Its range is 5000-5500 kilometres, but China has alleged that India is keeping its range classified, which is actually 8000 kilometres. This range makes it easy for India to target China, Pakistan and some portions of Europe.

This is the fourth test before it is delivered to the user which is the Strategic Forces Command. Earlier tests conducted were , first test was on 19 April, 2012, second test on 15 September, 2013 and third test was on 31st January, 2013.

Earlier tests had minor rectifications to be done, like issues in the battery etc, which have been rectified in this test.

More than a ton of warhead can be carried in this 17-meter long missile which weighs around 50 tonnes. It is a surface-to-surface missile which follows the ballistic trajectory. This is the first strategic test conducted by India after it's entry in the Missile Technology Control Regime, earlier this year. MTCR is a 35-nation group to check the proliferation of nuclear weapons.
Today's solid propellant driven missile test was from a canister. Agni-5 is an all-terrain and all-weather missile.

There are talks of the Agni-6 missile but it is in early stages of development and is said to be capable of being launched from submarines as well as from land, with a strike-range of 8,000-10,000 km.

Agni-5, the Long Range Surface-to-Surface Ballistic Missile was successfully flight tested by DRDO today at 1100hrs from Dr. Abdul Kalam Island, Odisha. The full range test-flight of the missile has further boosted the indigenous missile capabilities and deterrence level of the country. All the Radars, tracking systems and Range Stations tracked and monitored the flight performance and all the Mission objectives were successfully met. This was the 4th test of Agni-5 missile and the second one from a Canister on a Road Mobile Launcher. All the four missions have been successful.

The President of India Shri Pranab Mukherjee congratulated DRDO for the successful test flight of Agni-V which will enhance the country’s strategic and deterrence capabilities.

The Prime Minister, Shri Narendra Modi congratulated DRDO on successful test firing of Agni-V saying that it is the result of hard work of DRDO and its scientists which makes every Indian proud and adds tremendous strength to our strategic defence. Defence Minister Shri Manohar Parrikar also congratulated DRDO for the successful test firing of Agni-V for further strengthening India’s defence capabilities