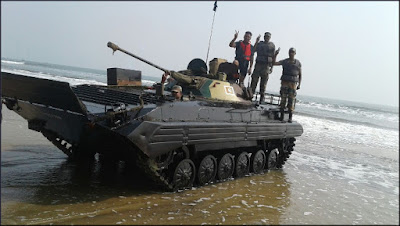 With the aim of fostering joint training and validating Standard Operating Procedures for Amphibious Operations, the Eastern Naval Command commenced an amphibious exercise 'Jal Prahar' off Kakinada coast on 21 December 2016. Flag Officer Commanding Eastern Fleet along with Brigade Commanders of 108 Mountain Bde and 91 Infantry Brigade are overseeing the exercise.

The three day exercise include participation of IN ships Jalashwa (LPD) and Gharial (LST) from ENC and INS Cheetah (LST) from the Andaman and Nicobar Command (ANC). Ships of Eastern Fleet are operating in close vicinity of the amphibious ships in support of the operation. Army component include participation of one company of troops each from Southern Army Command and ANC. In addition to ground troops, mechanised vehicles and troop carriers are also participating in the exercise. Aircraft from Naval Air Stations Dega and Rajali are also participating in the exercise by providing air cover during the operation.