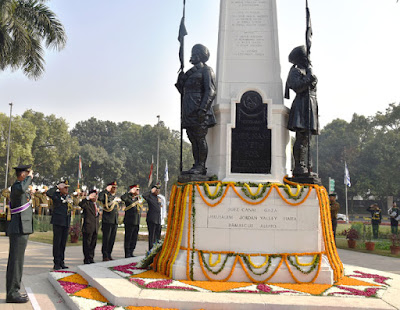 A wreath laying ceremony was organised today at the Teen Murti Memorial by the Cavalry Officer’s Association (COA) to honour the sacrifice and splendid contribution of the Indian Cavalry since World War I. The wreaths were placed by serving and retired officers of the Cavalry fraternity of the Indian Army including Gen V N Sharma (Retired), former Chief of the Army Staff, Lt Gen Praveen Bakshi, GOC-in-C, Eastern Army Command and Lt Gen A B Shivane, DGMF.

Teen Murti memorial was instituted in memory of the Cavalry officers, Non Commissioned Officers and men of the 15th Imperial Service Cavalry Brigade composed of Cavalry Regiments from the Indian States of Hyderabad, Mysore and Jodhpur and with detachments from Bhavnagar, Kashmir and Kathiawar who gave their lives in the Great War of 1914-1919 in the Sinai, Palestine and Syria. The Armoured Corps has witnessed the journey of time since independence with raising of modernised Arjun and T-90 Regiments. The year 2016 also marks 100 years of the tank.

Speaking on the occasion, Lt Gen Aditya Singh, (Retd), President COA pointed out the great contribution of the Indian Armoured Corps in protecting the Nation’s sovereignty. This is aptly reflected by the gallantry awards earned by the Corps since independence which includes Two Param Vir Chakras, 16 Mahavir Chakras, Three Kirti Chakras, 57 Vir Chakras and 26 Shaurya Chakras.