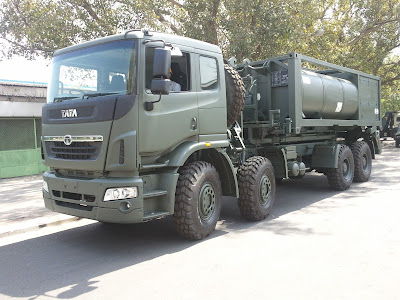 Commenting on the occasion, Biswadev Sengupta, President Director of Tata Motors Indonesia, a subsidiary of Tata Motors Ltd - Agent licensee (APM) of Tata Motors brand in Indonesia, said, “This is a very important milestone for Tata Motors operations in Indonesia and is a matter of pride to be able to co-operate with PT Pindad, which is held in high esteem by the Indonesian community. I am sure that through this arrangement, we can create a lot of value in Indonesia, a market which we are committed to in the long term.”
Biswadev further added “This foray into the defense business in Indonesia, is in continuation with the strides made in the logistics business in the country, where more than 3000 Tata vehicles are already on the road, covering Pickups, Light Trucks, Buses and Heavy Trucks.”

Tata Motors, is among the top 10 truck and bus manufacturer globally and a leading manufacturer of defence and military vehicles since 1958, catering to the light to heavy vehicle requirements of military and peacekeeping missions across the globe. Based on a customer centric approach, Tata Motors has created a focused division to design and develop defence technologies and products at its facilities in Jamshedpur and Pune.

For self-reliance in the area of combat vehicles, Tata Motors has laid emphasis on the development of combat vehicle technologies and systems, with the aim of empowering defence forces with breakthrough technologies, for high mobility, fire power and protection.
PT Pindad is an Indonesian state-owned enterprise specializing in military and commercial products. PT Pindad provides the main weapon systems (Alat Utama Sistem Senjata or Alutsista) required to support independence in defence and security of the Republic of Indonesia. Furthermore, PT Pindad (Persero) also produces several industrial products for other aspects such as transportation and commercial explosives. Its activities cover design, development, engineering and fabrication as well as maintenance.

Tata Motors has been associated with the country's off-road defence and security forces, since 1958 and has supplied over 110,000 vehicles to the Indian military and paramilitary forces, so far. The company offers its products and services that not only meet the needs of the Indian defence peacekeeping forces, but that of countries across the globe. Tata Motors exports its range of specialized defence vehicles to the SAARC, ASEAN and African regions. With Tata Motors rich portfolio in multi-axle vehicles like 12x12, 8x8 & 6x6, the company has started supplying to leading Missile OEMs across the world. The company has also established itself as a supplier of specialist vehicles for UN peacekeeping missions. Tata Motors range of off-road vehicles are also being procured by the agencies involved in AID & Development, across the world like GSA, KBR, Oxfam, RONCO, RA International & Riders.

Tata Motors Limited is India’s largest automobile company, with consolidated revenues of INR 2,75,561 crores (USD 41.6 billion) in 2015-16. Through subsidiaries and associate companies, Tata Motors has operations in the UK, South Korea, Thailand, South Africa and Indonesia. Among them is Jaguar Land Rover, the business comprising the two iconic British brands. It also has an industrial joint venture with Fiat in India.  With over 9 million Tata vehicles plying in India, Tata Motors is the country’s market leader in commercial vehicles and among the top in passenger vehicles. Tata cars, buses and trucks are being marketed in several countries in Europe, Africa, the Middle East, South Asia, South East Asia, South America, Australia, CIS and Russia.