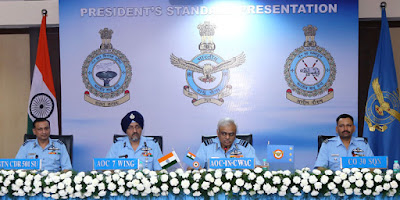 The Hon’ble President of India and the Supreme Commander of Indian Armed Forces, Shri Pranab Mukherjee would be awarding the prestigious President’s Standard to 501SU, Signal unit and 30 Squadron, during a grand ceremonial parade scheduled to be held at Air Force Station Ambala on 10 Nov 16. The Station Commander of 501 Signal Unit, Group Captain Vineet Jindal and Commanding Officer of 30 Squadron, Wing Commander Abhay Arun Phasnsalkar will receive the President’s Standard. The President will also release a First Day Cover of 501 Signal Unit and 30 Squadron during the ceremony.

Operational outfits of IAF become eligible for award of President’s Standard only after completion of 18 years. The selection is based on their performance and achievements, both during peace and hostilities. This honour is an acknowledgement of the meritorious service rendered by the selected units over the years. The President’s Standard is a visible symbol of excellence and has been earned by these Units through their dedication and worthy contributions both during peace and war. The Presidential award marks and epitomizes the hard work, valour and sacrifice of all the personnel posted to these units since their inception. It is a befitting recognition of their selfless service dedicated to the nation.

"Presidents Standards or 'NISHAAN' are much coveted and have a special significance for all of us in uniform" stated Air Marshal SB Deo, AOC in C, WAC while addressing a curtain raiser press conference held at Air Force Station Ambala today.