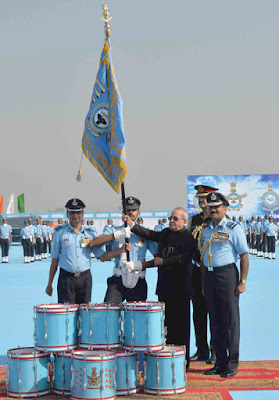 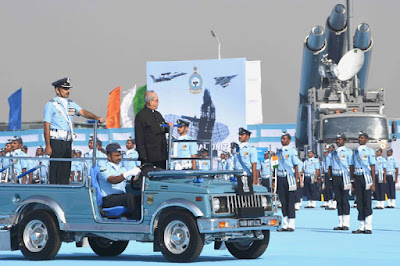 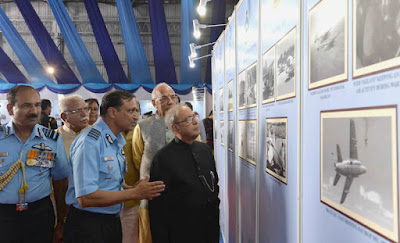 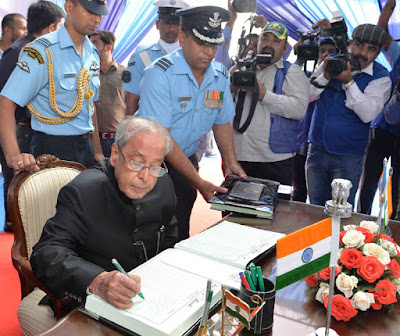 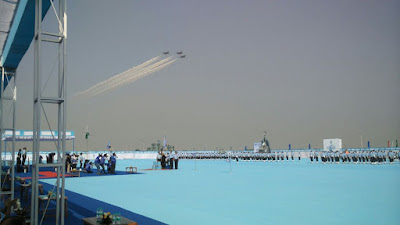 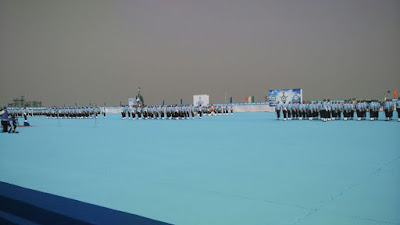 The event included a ceremonial parade, Aerobatic display by ‘Sarang’ and ‘Surya Kiran Aerobatic Team’ and a synchronized drill demonstration by Air Warrior Drill Team. Addressing the parade, Shri Pranab Mukherjee said that 501 Signal Unit and 30 Squadron had a rich tradition of valour and courage and had rendered distinguished service to the nation both during peace and war since their inception. He added that their personnel, both past and present, had put in relentless efforts in pursuit of excellence and set an example for others to emulate.

A photo exhibition was also organized on the occasion. To mark this glorious chapter in the annals of the history of IAF, the President of India also released First Day Covers for both the units. The President’s Standard are bestowed upon a unit in recognition of the dedication and meritorious service rendered by it, which represents the honour of a unit and is displayed with pride on ceremonial occasions. It is akin to the “Nishaan’ that used to be carried by our erstwhile fighting forces, whose personnel would fight till the last man and last drop of blood to protect the “Nishaan”. The award of President’s Standard serves not only as a source of inspiration and esprit-de-corps among the fighting forces, but also a symbol of excellence.

Speaking on the occasion, the President said that since their inception, both 501 Signal Unit and 30 Squadron have distinguished themselves in the service of the Nation with honour and distinction. In recognition of their selfless devotion, professionalism and dedication to Service, the Nation honours them today with a deep sense of gratitude and appreciation.

The President said that 501 Signal Unit has completed 52 glorious years of service to the Nation. The unit has been the pioneer of Air Defence in the Northern region since its inception as an Air Defence Ground Station at Barnala. 501 Signal Unit has performed its role with utmost determination and single minded dedication, both in peace and in war. 30 Squadron or ‘Rhinos’ was formed on 01 November 1969 in Tezpur. It was then equipped with the MiG-21 FL aircraft. Whether flying the MiG-21 or the formidable Sukhoi-30 MKI, the Squadron has an enviable operational record. Its personnel have contributed selflessly and set high standards of professional excellence for others to emulate.

The President expressed confidence that these Units would continue to strive for excellence with professional zeal and serve the Nation selflessly in the years to come. He also complimented the personnel and families of both Units, past and present, for their selfless sacrifice and service to the nation on the occasion.

Among the dignitaries present on the occasion were Prof. Kaptan Singh Solanki, Governor of Haryana; Shri Manohar Lal, Chief Minister of Haryana and General Dalbir Singh, Chief of Army Staff.