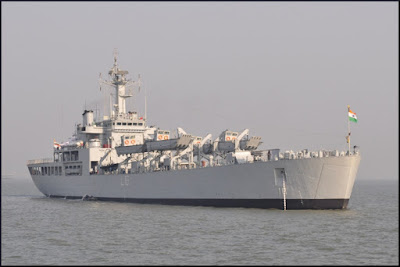 In a demonstration of India’s commitment to its ties with Mauritius and to promote maritime security in the Indian Ocean Region, Indian Naval Ship Shardul has arrived at Port Louis on a three day visit. INS Shardul, an amphibious ship of the Indian Navy, is currently on a month long deployment in the Southern Indian Ocean in keeping with the vision of SAGAR – Security and Growth for All in the Region. Accordingly, the Indian Navy will be progressing maritime security cooperation with Mauritius National Coast Guard (NCG) towards ensuring a secure and stable regional maritime environment for unhindered economic development in the region.

INS Shardul’s visit is part of its mission to carry out surveillance in the Mauritius EEZ with NCG personnel embarked onboard. During the current deployment, Shardul has also escorted MCGS Victory, a ship built at Goa Shipyard Limited, India and handed over to the NCG on 26 September 16. The ship would also assist local authorities in providing logistics and medical support to the outer islands of Agalega and St Brandon. Calls on senior Government and military authorities, training and technical cooperation measures with NCG, sporting and cultural interactions, aimed at strengthening ties and mutual understanding between the two forces, are also planned. At the helm of the ship is the Commanding Officer, Commander Abhishek Kumar who is assisted by a team of professional and highly motivated men of the Indian Navy.

Since 2009, the Indian Navy has been deploying ships to Mauritius bi-annually to assist in patrolling the vast EEZ of the country based on request by the Government of Mauritius. The last such deployment was by INS Trikand in July 2016. Further, ships of the Western Fleet had visited Port Louis in September 2016, during their deployment to the Western Indian Ocean. India and Mauritius have very close and cordial political and diplomatic relations with a sizeable settlement of people of Indian origin settled in Mauritius. The frequent visits by high level delegations including the Heads of State have further strengthened the bilateral relations. The visit by INS Shardul would further reinforce the cultural and ethnic ties between the two countries and contribute towards peace and maritime security in the region.