India To Embark On Self-reliance in Submarine Design, Construction: P75 I Soon To Be Announced: Manohar Parrikar 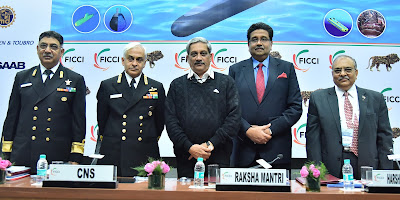 New Delhi, Nov 22, 2016. Shri Manohar Parrikar, Raksha Mantri, speaking at an International Seminar on Current and Future Challenges in Design and Construction of Underwater Vehicles, organized by FICCI with active participation of Indian Navy at Federation House, New Delhi, emphasized the commitment of government towards modernization of armed forces. He mentioned that the current government has cleared more than 2 lakh crore worth defence acquisition since it came to power and is resolved to order 3 lakh crore (cumulative basis) by the end of this financial year.

Mr Parrikkar commended Indian Navy for commendable track record in indigenously designing and constructing the advanced Front line Warships such as Destroyers, Frigates, Anti-Submarine Warfare Corvettes, Landing Crafts and is in the midst of constructing an Aircraft carrier. He further stated that in keeping with “Make-in-India” the indigenous content of the latest Naval Platforms is today a staggering 85-90 %.

During the deliberations he mentioned that the 24 submarines which are to be acquired as part of the 30 year submarine building plan of India, out of which 6 submarines have been ordered on MDL and the same are being built with the help of ToT from DCNS. Comparing submarine  Construction programs in other countries Parrikar further said that India should rethink its submarine building program and expand its fleet beyond the planned 24. He brought out while the underwater platforms built under the aegis of ATVP achieved indigenisation content >70% P75 program has not achieved quantitative indigenisation and is limited to 30%.

While emphasising the importance the importance of strategic programs, he mentioned that RFP for the much awaited P75(I) program, under which 6 more submarines are to be built with the help of private sector will be under the Strategic Partnership (SP) Model. He quickly added that the chapter on SP is being drafted and would be finalised soon and thereafter cleared by DAC and then referred to cabinet for approval. With the approval of SP, the program P75(I) program will be fast tracked, having lost some time in finalising the model.

He further directed the Navy and FICCI to submit specific recommendations as an outcome of the day long seminar which he would like to take note of for future acquisition plans.

Admiral Lanba PVSM, AVSM, ADC, Chief of the Naval Staff, Indian Navy while addressing the audience mentioned that the Aim of Indian Navy is to indigenously design and construct the submarines with the help of industry, academia and R&D. He brought out that Naval Platforms operate for nearly 25 – 30 years and thus depend on the partnership with the industry. He was quick to add that the Naval Capability Building cannot be accomplished by Navy alone and it has to be a collective effort of the government agencies, R&D and industry. He emphasised on the fact that the above aim needs firm support of robust budgets and sound infrastructure. He shared Navy’s belief that self  respect comes from self reliance. He rued that while Indian Navy achieved large scale indigenisation in Warship building the same cannot be said for Submarine design and construction. He was appreciative of the courage of the private industry having invested huge sums in this niche sector and has been resilient in withstanding the long gestation periods. He acknowledged that such efforts are to be supported by long term partnerships and commitments. He committed that Navy and industry would continue to grow on indigenisation. He talked of the Strategic Partnership model and said that it was a step in the right direction for building the much needed submarines at the required pace. He said Navy would continue to promote higher R&D in industry and partner with those who posses domain capacity and capability. He reiterated that life cycle support of the submarines is also to be given equal importance and emphasised that time lines for delivery of submarines is an important factor since delays would lead to obsolescence of technology on board. He highlighted the need for creativity, adaptability and flexibility to compress program cycle times. He directed that the dialogue initiated in the seminar would continue beyond to build long term partnerships.

Speaking on the occasion, Mr. Harshavardhan Neotia, President, FICCI expressed happiness over the highly collaborative work between Indian Navy’s Submarine Design directorate, MoD and Industry and stated that it is visible in industry’s  highly productive and frank interactions with MoD staff to achieve vital national objective of Indigenous design and construction of underwater platforms. He further quipped that Indian industry believes that P75I program is on track and is looking forward to participate productively in this program as well as the subsequent ones. Mr. Neotia stated that industry sees Make in India (Defence) as an opportunity towards not only achieving self-reliance but also creating the eco system that would promote high technology manufacture and high skill jobs in the country.

Rear Admiral CS Rao  NM mentioned of low visibility of DND (SDG) matching the underwater platforms and traced the history of the Submarine Design organisation of Indian Navy and reiterated the need to nurture the skills required for design and construction of these man made stealthy sea- monsters and brought out that these aspects would be addressed in two sessions; namely, synergy between key players and the emerging submarine technologies.