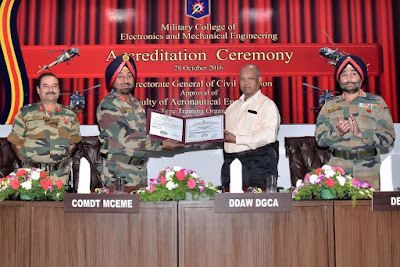 Lieutenant General Gurmukh Singh, Commandant, MCEME and Colonel Commandant, Corps of EME received the accreditation certificate form Shri Surender Toppo, Deputy Director Air Worthiness, DGCA Hyderabad in an impressive ceremony held at the College. In his address, he said “I laud the efforts of FAE in preparing themselves to meet the stringent standards of the DGCA and also exhort them to strive for greater excellence”.

Major General Sanjeev Khanna, Deputy Commandant & Chief Instructor of MCEME said that, “FAE is a centre of excellence in the domain of aeronautical engineering and, while it holds instructional staff and training infrastructure of the highest quality, the faculty would continue to raise its standards in the future”.

Over the years, MCEME has developed into a premier training institution of the Indian Army. It is a five time recipient of Golden Peacock Award for Training, ISO-9001 Certification and four Prime Minister’s Awards for Best Technical Projects.  MCEME is affiliated to JNTU and JNU for its M Tech, B Tech and Engineering Diploma programmes. DGCA approval for Type Training Organisation, conferred on Military College of Electronics and Mechanical Engineering is not only another laurel that enhances the prestige of the institution, but is also a testament to the exemplary benchmarks being achieved by the institution as it trains technical human capital for the Indian Army.