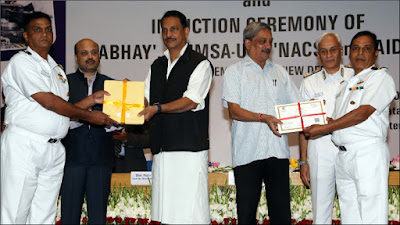 It was indeed a proud moment for the retiring naval sailors as they were awarded with “Skill Certificates” and handed over the “Placement Letters” by the Hon’ble Raksha Mantri Shri Manohar Parrikar and the Hon’ble Minister for Skill Development and Entrepreneurship Shri Rajiv Pratap Rudy in the presence of Admiral Sunil Lanba PVSM, AVSM, ADC the Chief of the Naval Staff at a valedictory function held at DRDO Bhawan today (18 Nov 2016).

In pursuance of the ‘Skill India’ mission launched by Hon’ble Prime Minister Shri Narendra Modi on 15 June 2015, a Memorandum of Understanding was signed between Ministry of Defence and Ministry of Skill Development and Entrepreneurship (MSDE) on 13 July 2015 to enhance the skill sets of retiring defence personnel and to enable them to be gainfully employed in nation-building.

The Navy thereafter carried out a detailed exercise in which it compared the curriculum of the courses run in service with the National Occupation Standard (NOS) and the job profiles promulgated by National Skill Development Corporation (NSDC). A total of 159 courses were mapped to 258 job roles and the skill gaps identified.

The Indian Navy has achieved a major milestone with the successful completion of Pilot Batch of training of retiring sailors towards Skill Development. A total of 70 retiring naval personnel have been trained in collaboration with National Skill Development Corporation in their core domain by leveraging ‘Recognition of Prior Learning’. In addition, due to the professional competence and the extensive work experience of these sailors they have also been trained for instructing and assessing.

For the pilot batch, six job profiles in retail, healthcare and electronics were selected at three training schools of the Navy namely INS Hamla and School of Medical Assistants at Mumbai and INS Valsura at Jamnagar.The training was carried out by Naval Instructors who had prior instructional experience and had undergone training with the respective Sector Skill Councils. Training of the Pilot Batch was conducted in two phases during August and September 2016 during which a total of 70 sailors were trained.

NSDC, along with its Training Partners has facilitated placement for 58 retiring sailors who participated in both phases of Pilot Batch of skill certification.