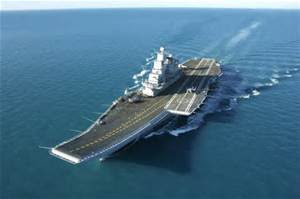 The Cochin Shipyard Limited dispelled  doubts  that CSL could repair the largest Indian aircraft carrier INS Vikramaditya, when on  5th November, 2016 the refit  was completed  a month ahead of schedule.  This aircraft carrier was purchased from Russia and commissioned into the naval fleet in 2014.

Shri Rajesh Gopalakrishnan, General Manager (Ship Repair Division) at CSL said “Till INS Vikramaditya docked in Cochin Shipyard and water was pumped out of the dock and we had her sitting safely, there was a real concern on whether India could do it”.
INS Vikramaditya is one of the biggest ships owned by India and ever  to have docked in India till date.  In September, the Indian Navy, one of CSL’s biggest client, decided to dry-dock the carrier attached to its Karwar Naval Base at CSL for repairs on a contracted schedule of 70 days. It was clearly an opportunity for CSL to prove that India had the infrastructure as well as expertise for the task. This will also ensure readiness  and  preparedness with an indigenous capability in case of an emergency, without having to face the embarrassment of sending the ship outside the country for repairs.
To lay the concerns to rest, CSL tasked IIT Chennai to undertake a detailed dock floor strength analysis to prove that CSL dock indeed had the capacity to accommodate loads of this nature.  The design of the dock blocks was done in-house thereafter by CSL to seat the Carrier in the dry-dock.  Ultimately, CSL got the opportunity to demonstrate  its capability to dock and repair INS Vikramaditya.
But, there was considerable planning & preparation to be done at CSL to accommodate the ship. This involved administrative, logistic  and technical arrangements of a large magnitude.  For one, INS Vikramaditya needed  specially designed dock blocks made of plenty of hard as well as soft wood on which she could sit. (Shipyards typically go for a combination of concrete and wood to dry dock ships for repairs.  But, in this case, plenty of "wholly wood" blocks were also used to address the loading concerns.) Another major cause for apprehension was whether this ship with higher draft would be able to clear the dry-dock sill without its propeller getting damaged, especially with the available water levels and tidal conditions in Kochi.

Then, there was  water depth issue to tackle. The carrier needed higher water depth to enter the Kochi harbour. The entire outer channel, Ernakulam channel and harbour area, including dock mouth and berths at CSL were dredged to a depth of close to 14 Mtr.

While  CSL was undertaking preparatory activities to enable the ship to dock, INS Vikramaditya had to berth at the ICTT Terminal nearby with a depth of 14.5 Mtr. This was to facilitate the ship to propel into Kochi on her own power.

The work package was contracted  and scheduled for 70 days but certain operational requirements demanded significant compression of the time-frame and the ship was un-docked and taken out of the yard in 42 days.

Accolades have been pouring in for CSL from various quarters including the Indian Navy complimenting “CSL for working whole-heartedly 24X7 and for proving that not only is the dock fully suitable but also that that commitment  and capability of Indians is second to none.”.

“It was all about human endeavour, team spirit, passion, nation building and Indian pride. CSL literally moved heaven and earth and burnt the midnight oil to complete the task entrusted to us by the Indian Navy and that too way ahead of schedule,” says a gleaming Madhu S Nair, the Chairman & Managing Director of Cochin Shipyard Limited.

Incidentally, all three aircraft carriers of the Indian Navy were in and around CSL for around a month during this period.  First, INS Viraat, came into CSL for a short refit before its de-commissioning (which is understood is planned for early 2017).  INS Vikramaditya, originally expected for refit at CSL in October 2016, was dry-docked in September 2016.   It was virtually a touch and go situation for CSL as INS Vikramaditya came in close on the heels of INS Viraat.  INS Viraat, was still berthed at Kochi when INS Vikramaditya came in to dry-dock at CSL.   All this while, the third carrier, INS Vikrant, Indian's First Ingenuously built Aircraft Carrier was under construction at CSL, resulting in a situation where all the three aircraft carriers were in Cochin. The whole effort and its tremendous success augers well not only for India's most dynamic shipyard, the Cochin Shipyard Limited, but also for the nation as a whole.