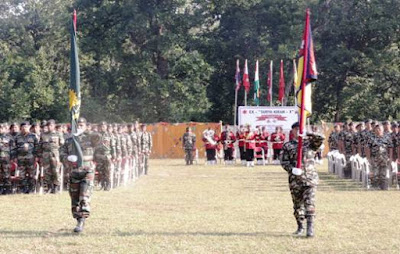 Indo-Nepal Joint Military Exercise Surya Kiran-X commenced at Army Battle School, Saljhandi, Nepal. It is the tenth in the series of such exercise between the two nations and is scheduled from 31 October to 13 November 16. The Surya Kiran series of Exercises are being conducted annually, alternatively in Nepal and India. Notably in the series of military training exercises undertaken by India with various countries, Surya Kiran series with Nepal is the largest in terms of troop’s participation.
Indian Army is represented by the elite Kumaon Regt, while Jabar Jung Battalion of Nepal Army is participating in this edition of the joint exercise on behalf of Nepal Army. The aim of this exercise is to conduct battalion level joint training with emphasis on Counter Terrorism in mountainous terrain. Aspects of Disaster Management have also been included in the exercise.