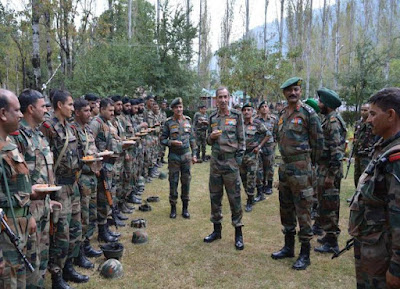 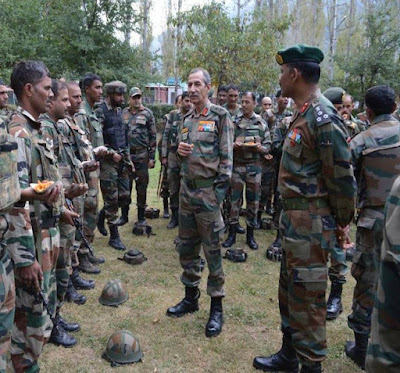 Indian Army successfully foiled three infiltration bids along the LC in which three terrorists were killed in Naugam sector and eliminated three heavily armed terrorists in Handwara. Northern Army Commander Lt Gen DS Hooda visited the frontier area of Uri and reviewed security with the local commanders. Accompanied by the Chinar Corps Commander Lt Gen Satish Dua, the Army Commander took stock of all measures taken by the Army to beat back any misadventure from across. During his interaction with officers and men on ground, he conveyed his compliments for their high levels of operational preparedness, vigil and morale and exhorted them to remain alert for any eventuality.

The Army commander also complimented the troops operating in hinterland for their professionalism which was amply displayed again in the successful foiling of terrorist attack in Baramulla on 03 Oct 16 and in today’s operation in Langate, Kupwara & Naugam.

Later, both the senior officers visited Awantipura based Victor Force Headquarters where Gen Hooda was briefed by the Kilo and Victor Force Commanders on the security situation in Kashmir. The Army Commander urged all to sustain the pressure on terrorist groups operating in the valley and also to continue with the humanitarian initiatives to help the Civil Administration in alleviating the problems of the people.

Four Border Security Force (BSF) personnel were injured in Pakistani firing along the Line of Control in Mendhar Tehsil of Poonch district of Jammu and Kashmir.

The Army and BSF troops who are on a very high state of vigil along the LC, detected two infiltrating columns of terrorists in Naugam and another in Rampur in the early morning today. Even though under intense fire from Pakistani posts, evidently to facilitate the infiltration, the Army immediately intercepted the terrorists ahead of the LC.

The joint  action by the Army and BSF has resulted in the elimination of six terrorists whose bodies have been recovered along with two AK rifles and other war like stores from Naugam sector  in the search operations that continue even now.