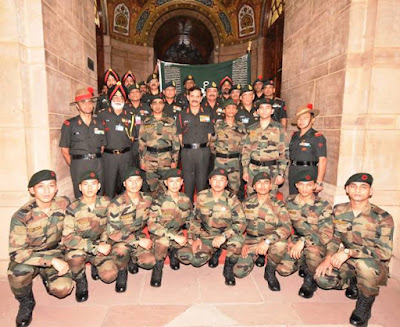 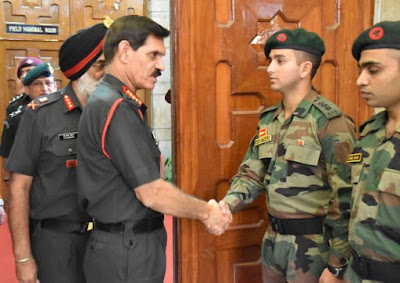 Gen Dalbir Singh, the Chief of the Army Staff, felicitated the Indian Army team which has achieved the Gold standards in Cambrian Patrol, at South Block, New Delhi, today. The team of two officers and nine soldiers of 2nd Battalion 8th Gorkha Rifle led by Capt Nikhil Nikam had participated in the Exercise conducted in Wales, UK. The COAS complimented the team for the professionalism displayed by each member and awarded the Chief of Army Staff Commendation Card to the team member.

Cambrian Patrol is a grueling exercise which involves negotiating difficult terrain carrying a personal load of 30kgs over 50-60 km in 48 hour. During the exercise they are made to negotiate minefields, carry out river crossings and other such combat drills.  As part of the simulations, the patrol also deals with hostage situation.

Cambrian Patrol Exercise 2016, which was conducted from 13 to 24 Oct 2016, saw participation from 18 foreign teams.  The Indian Army team was nominated to participate after a tough trial.  Displaying outstanding professionalism, grit and determination, the team achieved Gold Standard and was one of the four foreign teams to achieve these standards.