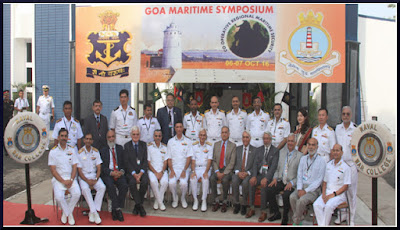 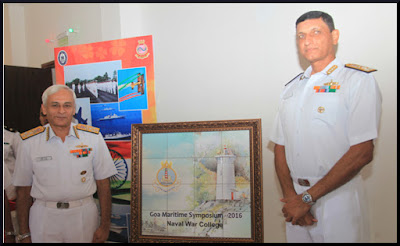 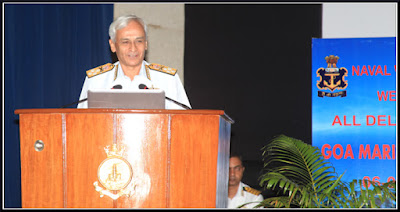 Inaugurating the first ever Goa Maritime Symposium conducted by the Naval War College, Admiral Sunil Lanba, Chief of the Naval Staff reiterated the importance of cooperative engagement to promote maritime security in the Indian Ocean Region (IOR). This, he said, has been the Navy’s consistent approach and was congruent to the government’s SAGAR (Security And Growth for All in the Region) initiative for inclusive development. Admiral Lanba complimented the college on this initiative and presented awards to the graduating international officers of the maiden Regional Maritime Security Course. He urged them to take forward the knowledge gained and bonds developed during their stay at Goa to build a better and more secure future.

Divided into four sub-themes, the symposium conducted over two days evaluated Strengthening of Regional Maritime Security Architectures; Enhancing Interoperability in the Indian Ocean Region; Challenges to Freedom of Navigation; and Maritime Security Challenges in the IOR. Each of these themes was elaborated upon by speakers of national and international renown, comprising a veritable who’s who of analysts, scholars and practitioners such as Admirals Raja Menon, Arun Prakash, Sureesh Mehta, Vijay Shankar, Pradeep Chauhan; Commodore Uday Bhaskar; Professor Geoffrey Till, Vijay Sakhuja, Dattesh Parulekar and Ms Tomoko Kiyota. Senior officers from Bangladesh, Indonesia, Malaysia, Maldives, Myanmar and Sri Lanka actively contributed to the symposium by sharing the experiences, concerns and perspectives of their respective countries.

“Each sub-theme stimulated engaging discussions and we collectively deliberated on several aspects of regional security mechanisms and cooperative frameworks in the context of present as well as future maritime challenges and how we can achieve greater efficacy and efficiency in mitigating them”, said Rear Admiral Monty Khanna, Commandant of the Naval War College. He added that basic security perception, projection and understanding of          all affairs – maritime – must have the essential elements of regional cooperation.

The symposium contributed majorly towards fostering a sense of maritime awareness that presupposes efficiency in cooperative mechanisms. It also brought out competing narratives and suggested roadmaps for the future including strengthening existing frameworks such as the Indian Ocean Naval Symposium (IONS) – an Indian Navy initiative since 2008.