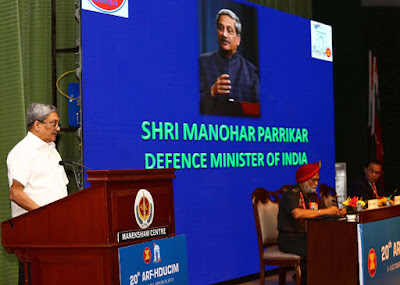 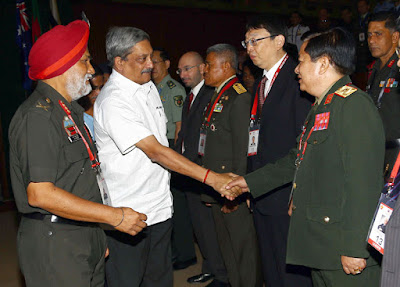 Expressing concern over the rising incidents of terrorism in recent times, the Defence Minister Shri Manohar Parrikar stated that non-traditional threats and terrorism remained the foremost challenges to South East Asia region. He stressed the need to oppose terrorism resolutely everywhere, delegitimize it as an instrument of State policy and cooperate unreservedly to locate and destroy terrorist networks. Shri Parrikar was delivering his keynote address at the 20th ASEAN Regional Forum (ARF) – Heads of Defence Universities / Colleges / Institutions Meet (HDUCIM) here today hosted by the National Defence College (NDC), New Delhi under the aegis of Ministry of Defence.

The Minister referred to the maritime domain as a key enabler of prosperity that has a wide spectrum of threats. He reiterated India’s support for freedom of navigation, over-flight and unimpeded lawful commerce, based on the principle of International law as reflected notably in the United Nations Convention on Law of the Sea (UNCLOS). He remarked, India believes that States should resolve disputes through peaceful means without threat or use of force. “Prime Minister Shri Narendra Modi’s vision for the Indian Ocean as captured in the acronym SAGAR or Security and Growth for All in the Region shows India’s approach to the broader Indo-Pacific region”, he said. The Defence Minister further stated that India is not only committed to safeguard its land and maritime territories and interests, but will also make its capabilities available to other regional countries. He exhorted member countries to increase the dynamism and efficiency of the ARF and enhance cooperation on multi-national responses to non-traditional security challenges including climate change, space and cyber security.

The three-day meet is being attended by representatives of 23 member nations and organisations including China, Japan, Philippines, Vietnam, Russia, EU and ASEAN Secretariat. India last hosted the meet in October 2003 in New Delhi. The main theme of discussion at the meet will be ‘transformation of military education to meet the challenges of 21st Century’. Participating countries will have detailed deliberations on how to further reinvigorate professional military education to meet contemporary challenges to efficient and effective military leadership. They will also discuss reinvigoration of Professional Military Education (PME) to build capacity to counter non-traditional threats like natural disasters, pandemics, transnational crimes and demographic issues. Finally, it would have a brainstorming session on how to promote effective defence diplomacy for better mutual trust and understanding.