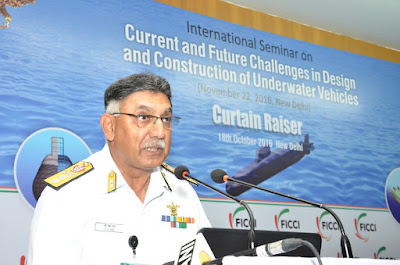 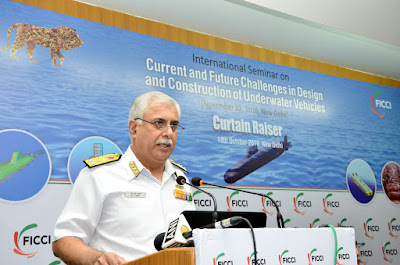 NEW DELHI, 18 October 2016: Vice Admiral GS Pabby, AVSM, VSM, Controller of Warship Production & Acquisition, Indian Navy, said here today this is the right time for India to take a major step towards building submarines indigenously by forging a strategic partnership with the Indian industry. He urged the leading industry houses to grab the opportunity to strengthen Indian’s Navy and added that there is a plethora of design and development opportunities available to the private sector in manufacturing of Navy equipment for the future. He mentioned that the six submarines on offer to the private sector for under P75(I) program was yet another opportunity by MoD to integrate the private sector in strategic defence production.

Vice Admiral GS Pabby was speaking at a function organized by FICCI where he announced the holding of the International Seminar on ‘Current and Future Challenges in Design and Construction of Underwater Vehicles’ on November 22, 2016 at Federation House. The event will be organized by FICCI  with active participation of the Indian Navy. Leading design houses are invited and are expected to participate in this niche seminar.

Vice Adm GS Pabby said that though India entered the sphere of submarines late but it was able to quickly catch up with the complex technology. Today, Indian Navy is designing and developing many of its equipment indigenously. The Navy has also built need-based operational requirements but is now developing its capabilities and is setting up extensive infrastructure to develop submarines in India.  He mentioned that the Indian Navy took a visionary step in 1986 to establish in-house submarine design capability and the proposed seminar coincides with the 30th anniversary of the Directorate of Naval Design (Submarine Design Group).

Rear Admiral CS Rao, NM, DGND (SDG), Indian Navy, presented the scope of seminar which aims to deliberate on unique challenges and complexities of submarine design and construction; with the aim to achieve national competence in submarine design and construction through industrial partnership. He mentioned that the seminar will be divided in two technical sessions wherein session 1 will focus on self-reliance in design and construction of submarines while session 2 will deliberate on design challenges in platform integration of emerging submarine technologies. During the seminar, the officers of Indian Navy, will present perspectives on the above topics and deliberate on the future requirements to be met by the industry, academia and research and development agencies.

Dr. A. Didar Singh, Secretary General, FICCI, said that the objective of the international seminar is to emphasize the design capabilities of Indian Navy and other design agencies and to hand hold Indian industry to make the best of the capabilities and how to focus on the future requirements. He said FICCI is continuously focusing on futuristic technologies and added that in order to fulfil the national aspiration of establishment of strong defence industrial base in country, there is a need to do away with licensed production. India needs to encourage innovations in design to enhance its scientific capabilities which can later be transferred to industries for commercialisation of defence technologies.