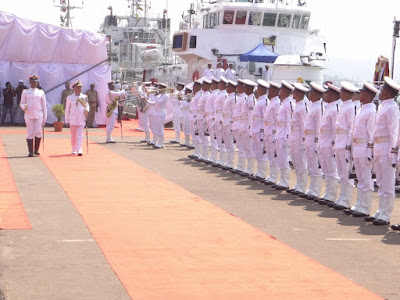 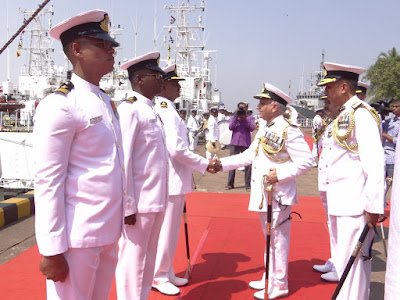 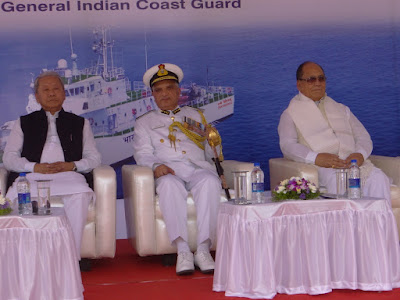 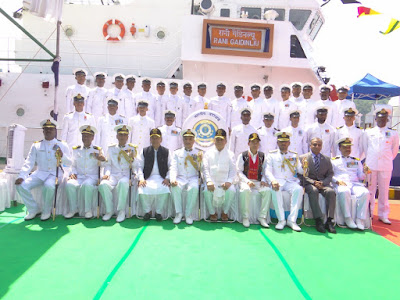 The 51 mtr Fast Patrol Vessel, ICGS Rani Gaidinliu, the fourth of its class has been designed and built indigenously by M/s Hindustan Shipyard Limited. The vessel is equipped with the most advanced and sophisticated navigational and communication sensors and equipment. The ship is
propelled by three MTU 4000 series Diesel engines of 2720 KW capacity at 2100 rpm each coupled with three 71S2 Rolls Royce Kamewa Jets and can achieve a maximum speed of 34 Knots. This is the 4 th Fast Patrol Vessel (FPV) among the five vessels being constructed by Hindustan Shipyard Ltd. Speaking during the commissioning of the vessel, Director General Indian Coast Guard lauded the efforts of the Coast Guard in guarding the coastal security.

Explaining the role of ICGS Rani Gaidinliu, the Director General Indian Coast Guard said that the FPV will primarily focus on surveillance at the sea, coastal patrol, anti smuggling operations, protection of fishermen apart from the routine search and rescue operations. He emphasised it as yet another defining moment in the annals of Indian ship building industry and is testimonial to our indigenous ship building capability which further bolsters the nation’s ‘Make in India’ campaign. The Indian Coast Guard are well on its way to self reliance by committing themselves to the path of indigenisation, said the Director General Indian Coast Guard on the occasion. He also added that, the changed security scenario in the maritime domain dictates the need for coastal security 24x7 basis wherein, the Coast Guard have to maintain a constant vigil.

ICGS “Rani Gaidinliu” has a complement of 05 officers and 34 men and is commanded by Commandant(JG) Ramesh V Talke. The ship will be based at Krishnapatnam under the administrative and operational control of the Commander, Coast Guard Region (East).

ICGS Rani Gaidinliu on joining will enhance Coast Guard’s capability in furthering its mandate of maritime safety, security of the eastern sea board.