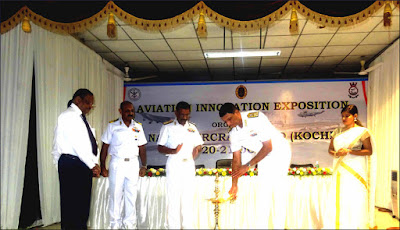 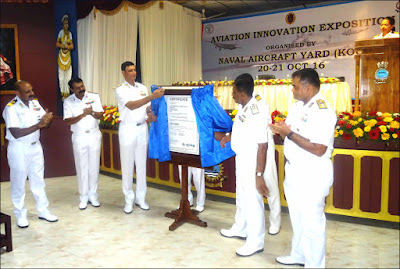 A first of its kind Aviation Innovation Exposition is being organised by Naval Aircraft Yard from 20-21 Oct 16 at Kochi in line with the nation’s drive for ‘Self Defence through Make in India’ campaign. The two day exposition was inaugurated by Vice Admiral AR Karve, AVSM, Flag Officer Commanding-in-Chief, Southern Naval command on 20 Oct 16 at Naval Base Kochi. The unveiling of the AS9100C certification, the highest accreditation for any aviation maintenance repair organisation which has been recently bestowed upon NAY (K) was also carried out by the chief guest on the occasion

Twenty exhibitors from across the country are showcasing their technological capabilities in areas where Naval Aviation requires handholding on account of diminishing product support from Original Equipment Manufacturers (OEM). Senior military airworthiness certification officials are also attending the exposition for the ease of understanding of aviation product standards by the industry.
The objective of the exposition is to bring leading private players to the Aircraft Yard to fight the bane of obsolescence of vintage systems through technological substitution and innovative repairs.