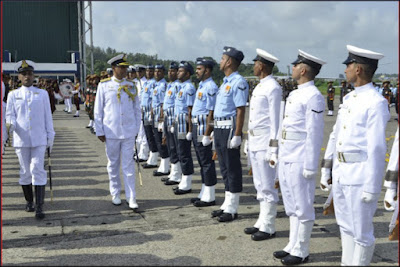 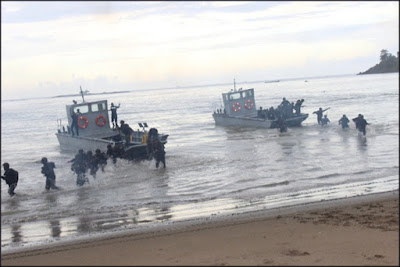 16th Raising Day was celebrated by the Andaman and Nicobar Command on 08 Oct 2016. The only tri-service operational Command of the Indian Armed Forces commemorated its raising, by conducting several events over three days (07 – 09 Oct 16).

The Commander-in-Chief Andaman and Nicobar Command, Vice Admiral Bimal Verma, AVSM, reviewed the parade at INS UTKROSH and awarded Unit Citations to five Units for their outstanding performance in the last one year.

In his address, the CINCAN congratulated all the components for the synergy displayed in operations and training, optimum utilisation of resources and achievement of desired operational efficiency. He commended all ranks for flawless conduct of bilateral exercises with the littorals and jointness in operations, resulting in reduction in poaching activities, rescue of 47 civilians from the sea in the last one year, and successful conduct of Disaster Management Exercise. The CINCAN also highlighted several activities in the last one year such as participation in community outreach programmes and social welfare schemes under the aegis of Defence Wives Welfare Association (DWWA), conduct of multi specialty medical camps in remote areas and Swachh Bharat Abhiyaan as part of the commitment of ANC to serve the Islanders.

The CINCAN informed the Armed Forces personnel that several important projects of strategic significance had been approved by MoD in the recent months. He observed that these projects, coupled with recent induction of operational assets by all the components such as MI-17V5 helicopter, Dornier aircraft, Guided Missile Corvette, IPV, Fast Interceptor Crafts and radars would further enhance the operational capabilities of the ANC, in its primary role of safeguarding the territorial integrity of India.

The CINCAN exhorted all ranks and their families to maintain high level of alertness in order to guard against inimical elements. He also emphasized upon revisiting the preparedness against natural disasters and continuing efforts towards community outreach. The ceremony concluded with presentation of Unit Citation to five units as recognition of professional excellence in last one year. These units are 20 GRENADIERS, INS BITRA, COMMAND DIVING UNIT, COAST GUARD AIR ENCLAVE and 151 SQUADRON.

As part of the celebrations, CINCAN also attended a Barakhana organised at Brichgunj on 07 Oct 2016, a traditional meal with troops and families of all components of the ANC. Among other events, a media conference was held on 08 Oct 2016, chaired by CINCAN.

The celebrations concluded with Amphibious demonstration at Corbyn Cove beach on 09 Oct 16, attended by about 650 students from local schools. Amphibious and other ships of Navy and Coast Guard, armoured troops carriers of Army and aircraft of the Navy, Air Force and Coast Guard participated in the demonstration. Amphibious operations are conducted to carry troops ashore via sea so as to regain a territory lost to the enemy or to gain enemy territory for progressing further operations. These operations are also conducted to render assistance during disaster relief when access to land by road/air becomes difficult. Being located in the island territories of Andaman and Nicobar, amphibious operations are the raison d’etre of ANC and are the pinnacle of joint operations by its components.