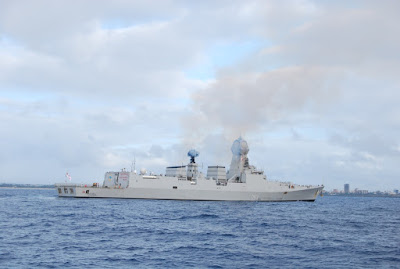 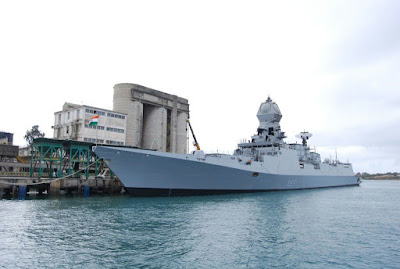 In a demonstration of India’s commitment to its ties with Kenya and to promoting maritime security in the Indian Ocean Region, Indian Naval Ships Kolkata and Aditya under the Command of the Flag Officer Commanding Western Fleet, Rear Admiral Ravneet Singh,NM have arrived at Mombasa on a three day visit. The ships are part of the Indian Navy’s Western Fleet based at Mumbai under the Western Naval Command and are on a two month deployment to the Western Indian Ocean.

The current visit is aimed at enhancing bilateral ties, strengthening the existing bonds of friendship and reinforcing cooperation in maritime security between India and Kenya. During the visit, the warships will interact with the Kenyan Defence Forces on professional issues, aimed at enhancing co-operation and sharing nuances of naval operations including combating threats of maritime terrorism and piracy. In addition to professional interactions, the ships, during their stay in harbour, will undertake a plethora of activities, including official calls and cultural events. The ships would also be open to public for onboard visits during the stay at Mombasa. INS Kolkata is commanded by Captain Rahul Vilas Gokhale and INS Aditya is commanded by Captain Vidyanshu Srivastava.

India and Kenya have historical maritime trading links. The sizeable Indian diaspora settled in Kenya is a testimony of our strong cultural linkages. The signing of the India-Kenya Trade Agreement in 1981, under which both countries accorded Most Favoured Nation status to each other, set the foundation for strong and vibrant trade relations. Bilateral relations between the two countries have since been progressively stepped up through economic, military and diplomatic cooperation. The recently concluded visit of India’s Prime Minister Shri Narendra Modi provided fresh impetus to the bilateral relationship between the two countries. The healthy state of naval cooperation is evident from frequent port visits by Naval ships, hydrographic survey by Indian survey ships and training of Kenyan Naval personnel in India. The Indian Navy last visited Kenya in October 2014 when Indian Naval ships Mumbai, Talwar and Deepak visited Mombasa as part of overseas deployment. The current visit seeks to strengthen the existing bonds of friendship between India and Kenya and underscore India’s peaceful presence and solidarity with friendly countries of the region.