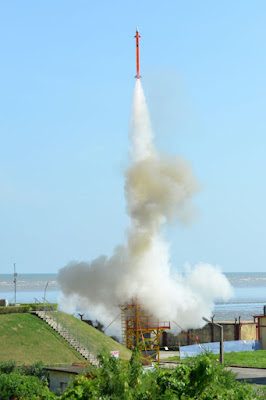 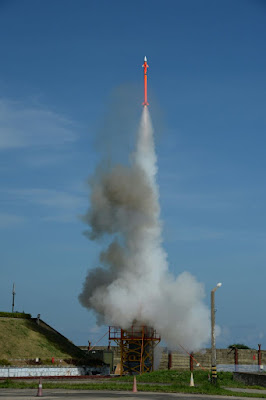 Long Range Surface to Air Missile System (LRSAM) for Indian Navy successfully flight tested against Pilotless Target Aircraft (PTA) on 20th Sept 2016 at 10:10 hrs and again at 14:25 hrs from Interim Test Range (ITR) at Balasore, Odisha, yesterday. The LRSAM has been developed through a joint venture between DRDO India and IAI of Israel. The naval version of the SAM system, this time was tested from land and the earlier was flight tested from Naval Ships, at ITR. Both missiles directly hit their respective targets at different ranges and altitudes. The trajectory of the flight of missiles was throughout tracked and monitored by the radars and electro-optical systems installed at ITR.
Many industries viz. BDL, MIDHANI, TATA, GODREJ, SEC, PEL, ADITYA and others have contributed towards the development of Missile systems. Both Israel and Indian scientists and technicians have been involved in the launch campaign. The Israel team was led by Mr. Boyes Levy, Vice President, IAI of Israel, whereas the Indian Team by Mr Patrick D’Silva, Project Director, Mr. MSR Prasad, Director DRDL and Dr. BK Das, Director ITR. Dr. G Satheesh Reddy, DG (MSS) & SA to RM witnessed the launches.

The President of India, Shri Pranab Mukherjee congratulated DRDO on the successful test-firing of the Surface to Air Missile – ‘Barak-8’.

In a message to Dr. S. Christopher, Secretary, Department of Defence Research & Development and Director General, DRDO, the President has said, "I extend hearty congratulations to you and all those associated with the successful test-firing of the Surface to Air Missile – ‘Barak-8’ developed jointly with Israel.

The nation is proud of this achievement. I am sure that this success will further boost India’s defence capabilities in technologically challenging areas.

Kindly convey my greetings and felicitations to all members of the team of scientists, engineers, and others involved in this Mission”.