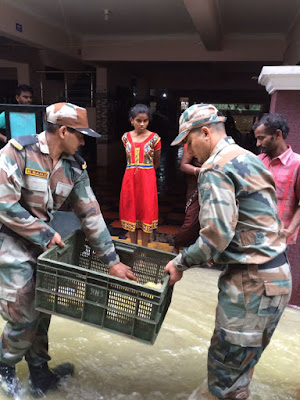 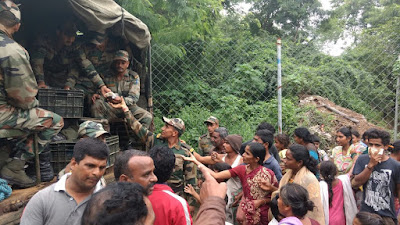 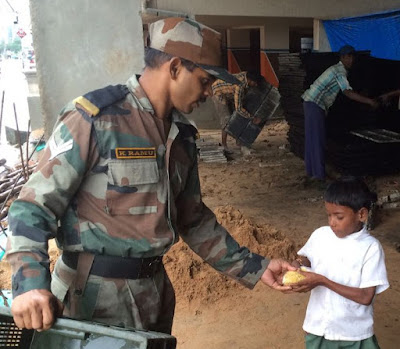 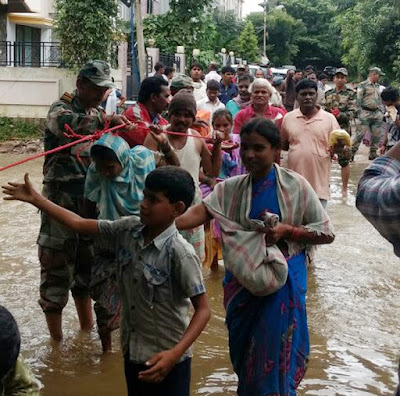 Four columns of Army have been deployed in areas of Begumpet, Nizampet, Hakimpet and Alwal of the Greater Hyderabad. The Army has also setup a control room at GHMC office and in coordination with the GHMC and NDRF officials are closely monitoring the situation in ground round the clock. Army columns are already on track to provide relief material and medical aid in the slum areas of Alwal. Other columns of the Army have been kept on standby, to be deployed when required.

The Indian Air Force has been standby to assist the Civil Administration at short notice. The Telangana Government has approached Indian Air Force to rescue 21 civilians who are stranded in the Edupayala village of Medak district. 03 Chetak helicopters of the Indian air force have been assigned the task to rescue the stranded people. Two rescue attempts were made, but unfortunately aborted due to heavy rains in the area. However, further attempts to rescue will be carried out.
SKG/BSK/24092016/2


Two Chetak helicopters of the Indian Air Force got airborne at 0709h today for carrying out rescue operations at flood hit Edupalaya village in Medak district. The operation lasted for more than an hour wherein the Indian Air Force successfully airlifted 23 construction workers trapped on an island amidst strong currents and moved them to safer places. The helicopters landed back at 0851h after successful completion of the rescue despite inclement weather in the area. The operation was undertaken from Air Force Station Hakimpet in Hyderabad and was coordinated by Wg Cdr P Surendran, the Chief Operations Officer at Air Force Station Begumpet. Indian Air Force had been standing by for last two days and yesterday two attempts were made at rescuing the marooned workers, which did not fructify due to heavy rain and low clouds. However, with the persistent efforts of IAF, the mission was successfully accomplished today. IAF is further standing by to undertake rescue operations in view of forecast of more rain in the next couple of days.

Joint Coastal security exercise ‘Sagar Kavach’ for coast of Tamilnadu and Union Territory State of Pondicherry is planned to be conducted from 28-29 Sep 16. The two day joint exercise will have the active participation of all agencies such as the Indian Coast Guard, Indian Navy, Coastal Police, State and U/T administration, State/UT police, Fisheries Department including Marine Enforcement Wing Intelligence Bureau, Customs, Chennai Port Trust, Director General Light House and Light Ships and Department of Port, Shipping and besides the fisherman association and fishing communities of the state of Tamilnadu and Puducherry.

The exercise will be conducted by the Coast Guard from its ROC (Chennai) Operations room at Regional Headquarters and monitored from the Joint Operation Centre (JOC), at Naval base, Vizag. During the exercise, participating units will be formed into two groups with one group simulating as an attack force and the other group defending the coasts. Maximum coastal security assets consisting of the Naval and Coast Guard ships, interceptor crafts, helicopters, Unmanned Aerial Vehicles (UAVs), boats of the Coastal Police, Customs, CISF will be deployed for carrying out comprehensive surveillance of the coastal waters to prevent any infiltrations. The ROC/ROS Chennai in tandem with JOC, Vizag and Coast Guard operations rooms will be manned by representatives of all coastal security stake holders during the exercise.

This exercise is held periodically to test the security apparatus along the coast and to revalidate the standard operating procedures by way of carrying out during attacks, with a focus on protecting the vital installations located coast to coast.  All the local Police authorities / State Govt. authorities have been to appraised by way of Initial Planning Committee meeting chaired by the Principal Home Secretary with all the stake holders for smooth conduct of the exercise.