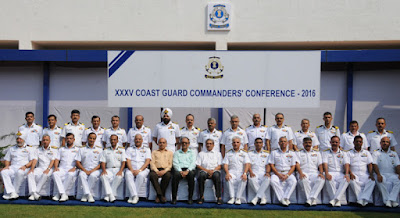 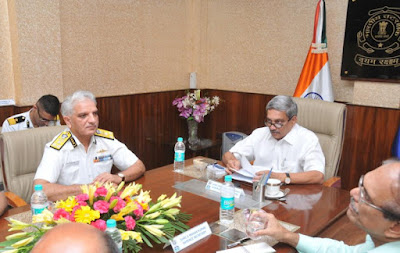 Defence Minister Shri Manohar Parrikar, inaugurated the 35th Coast Guard Commanders Conference at Coast Guard Headquarters here today. Speaking on the occasion, the Defence Minister appreciated the efforts of the ICG in augmenting Maritime and Coastal security not only by deployment of assets but also by efficient exploitation of Coastal Security Network Phase I and expressed hope that CSN Phase II would also be implemented on time. Due to current security scenario, he exhorted ICG to further bolster Coastal Security mechanism by increasing patrolling so as to avoid infiltration by anti-national elements through Sea.

While complimenting the officers and men of the Indian Coast Guard for displaying utmost dedication and professionalism in discharging their duties to endow credible maritime safety and security, the Hon’ble RM stated that the Coast Guard since inception has rendered yeoman service to the sea farers by ensuring their safety and security.

He also congratulated the ICG on their protracted efforts with Pakistan and Sri Lankan security agencies which resulted in reduced apprehension of Indian fishing boats. He was also glad to know that no Indian fishermen is under detention at Sri Lanka and requested ICG to also negotiate release of detained Indian fishing boats.

The Defence Minister promised all assistance of the Ministry of Defence for cases relating to the operational efficiency and those pertaining to the growth of the service, be it the manpower or new acquisitions. He welcomed the endeavour of the ICG to promote inclusiveness of all ranks by way of conduct of the Sub-ordinate officers’ Conference and efforts at realising the “Make in India” policy of the Govt. of India by ordering indigenous ships to strengthen the fleet. He wished the Coast Guard Commanders’ Conference a grand success and meaningful deliberations.

The conference was attended by senior officers of the Ministry of Defence and Indian Coast Guard (ICG) which included the Director General Rajendra Singh, Additional Director Generals and Coast Guard Regional Commanders. The conference is held annually, where all regional commanders put forth the roadmap for future; discuss various policy and strategic issues. The three-days conference aims to carve out a futuristic vision for the service and to determine the modalities to overcome the challenges efficiently.