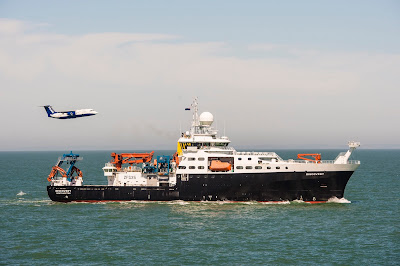 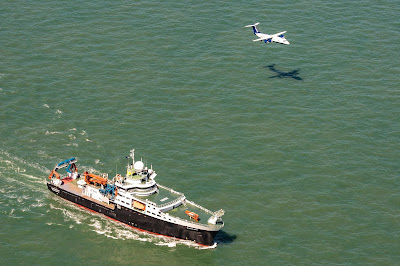 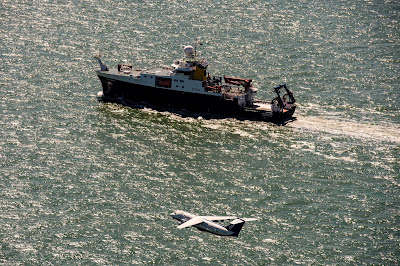 Explore the UK’s most advanced scientific instruments
The Environmental science that touches us all: water, food and air
Today, the Natural Environment Research Council releases exclusive images of two of the world’s key scientific instruments taking part in a training mission ahead of going on public display at Into The Blue, an interactive celebration of science taking place in Liverpool and Manchester next month.

NERC is a world-leading science organisation, funding cutting-edge research around the globe. To do this we use some of the most advanced technology in the field.

For the first time, our 110m-long research ship, RRS Discovery, and our FAAM (Facility for Airborne Atmospheric Measurements) research aircraft have been photographed together. These precision instruments enable scientists to conduct research that affects our everyday lives: expanding our understanding of the environment, informing policy and helping us solve some of the biggest environmental issues facing us, such as air pollution, flooding and extreme weather.

Environmental science touches us all: we depend on it for clean water, food on our plates and fresh air – it’s the science we live and breathe. Into the blue is a celebration of this science and a unique opportunity for the public to see, first hand, the work of UK environmental scientists in our skies and seas.

Nine days of events will feature exhibitions, presentations, debates and hands-on science demos by real scientists. The centre-piece of Into the blue will be the chance to explore RRS Discovery, docked in Liverpool from 4th to 7th October and the FAAM aircraft at Manchester Airport from 25th to 29th October.

The specially adapted BAe 146-301 aircraft is the UK’s front line for investigating air pollution, weather patterns and cloud formations. In October the FAAM team will be ‘storm chasing’ across the UK – flying into violent low-pressure systems to further our understanding of high intensity rain storms, which are associated with climate change.

RRS Discovery is one of the world’s most advanced research vessels, providing UK marine scientists with a platform for world-leading oceanographic research. The ship’s science team will be using a variety of sonar

instruments to survey the seabed en route to its appointment with the public in Liverpool.

The accompanying images show both in a recent training exercise, with FAAM flying 50ft (15m) above sea level gathering low altitude samples, rendezvousing with RRS Discovery which was on route to Hull and conducting sea trials.

RRS Discovery and FAAM will next work together on a major five-year project to detect, explain and predict changes in ocean and atmosphere temperatures and circulation, in sea ice thickness and extent, and in key atmospheric constituents such as ozone, methane and aerosols in the North Atlantic.

Email ThisBlogThis!Share to TwitterShare to FacebookShare to Pinterest
Labels: ships