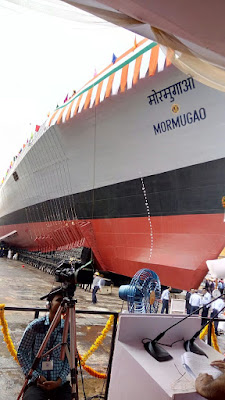 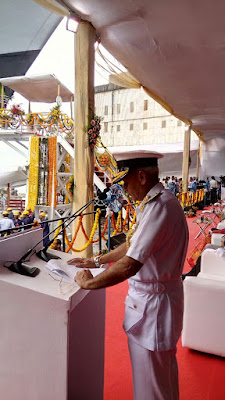 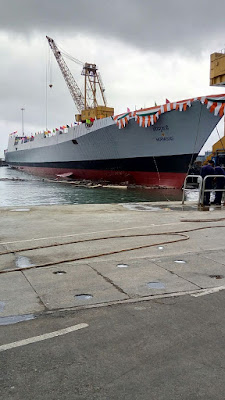 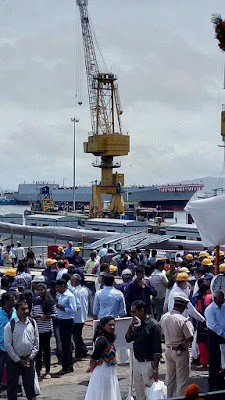 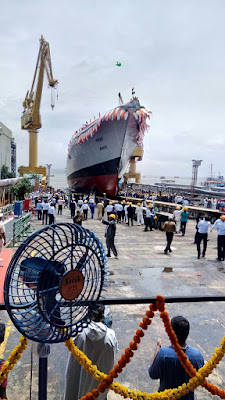 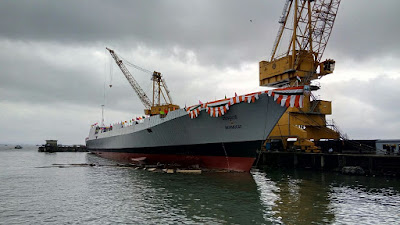 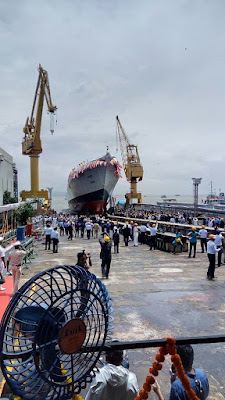 Mormugao, the second guided missile destroyer of Project 15B being built at MDL was today launched at the Shipyard by Mrs. Reena Lanba. Admiral Sunil Lanba, Chief of the Naval Staff was the Chief Guest on the occasion.

On the stroke of 1158hrs, to the strains of Saare Jahan Se Achha, the majestic vessel, bedecked in colourful buntings, gracefully slid into the Arabian Sea to fulfill her ultimate destiny.

In his welcome address Admiral Shrawat said that this ship is a shinning example of Make in India Spirit. The indigenization content of our projects has been rising significantly with each new project and is a matter of pride as well as satisfaction to all of us

He also said that MDLs turnover during 2015-16 has been the highest ever, over 4000 crore. This is the first time that MDL has crossed the 4000 crore mark.

P15B-Missile Destroyers are warships with latest weapon package in continuation of the lineage of highly successful Delhi and Kolkata Class ships. Under this project, MDL will build four Destroyers and deliveries are expected to be between 2020 to 2024. First ship of the class was launched on 20 April 2015. P15B ships have a displacement of 7300 T and maximum speed of over 30 knots. The vessel is equipped with Surface to Surface Missiles, Surface to Air Missiles, Anti-Submarine Rocket launchers. This warship is also fitted with Multi mission Radar for surveillance along with medium range Air / surface surveillance radar and other advanced electronic warfare and decoys. The ship is also capable of carrying two anti submarine warfare helicopter.

Launching per se is also an activity that needs to the orchestrated with precision in tandem with the rising and receding tides.  The team has once again demonstrated their capabilities for building quality ships which has always remained the forte of MDLs skilled workforce.  With this launch, the Shipyard will be abuzz with outfitting activities readying the ship for delivery.
2016 has been an eventful year for MDL. The newly constructed Submarine Assembly Workshop for undertaking construction of second line of submarines was inaugurated by the Honble Raksha Mantri, Shri Manohar Parrikar in May 2016. The third and last destroyer of Project 15A Chennai was delivered to the Indian Navy in August 2016 and is expected to be commissioned soon. After the launch of Yard 705 today, MDL is preparing for the launch of the second submarine Khanderi and delivery of the  first submarine Kalvari, which is currently undergoing sea trials.

Another significant milestone in the annals of the Indigenous Warship design and construction programme of India was achieved with the launch of Guided Missile Destroyer, Mormugao, second ship of Project 15B, on 17 Sep 16, at Mazagaon Dock Ship Builders Limited (MDL), Mumbai. With a launch weight of 2844 tonnes, the vessel made its first contact with water at 11:58 AM with full fanfare during the launching ceremony graced by Chief of the Naval Staff, Admiral Sunil Lanba as the Chief Guest. In keeping with maritime traditions, Smt Reena Lanba, President, Navy Wives Welfare Association (NWWA), broke a coconut on the ship’s bow and launched the ship, as invocation from the Atharva Veda was being rendered.

Speaking on the occasion, the Chief Guest, Admiral Sunil Lanba, Chief of the Naval Staff said that “this event is yet another moment of truth for the Indian Navy and India’s quest for self-reliance and indigenisation. The Indian Navy stands fully committed to the call of ‘Make in India’ and we are extremely proud of the fact that all of our warships and submarines on order today are being constructed within the country”. He further added that this also is “an affirmation of our resolve that the Indian Navy should attain a size and capability that is commensurate with India’s growing stature in the world, our national maritime interests, and our commitment to cooperation and collaboration towards ensuring secure seas for shaping a favourable and positive maritime environment.

The Admiral also commended the synergic partnership of MDL, Indian Navy, DRDO, OFB, BEL, other public sector enterprises and the private industry in ensuring that force levels are made available to meet India’s National strategic objectives. He also congratulated DGND and his team at Directorate of Naval Design for designing state of the art warships and contributing towards achieving Indian Navy’s dream of transforming from a “Buyers” to a “Builders” Navy.

Project 15B ships feature cutting edge advanced technology and are comparable to the best ships of similar class anywhere in the world. These ships have been designed indigenously by the Directorate of Naval Design, New Delhi. Each ship spans 163 metres in length and 17.4 metres at beam and displaces 7300 tonnes. These ships will be propelled by four gas turbines to achieve speeds in excess of 30 knots. The P15B destroyers incorporate new design concepts for improved survivability, sea keeping, stealth and ship manoeuvrability. Enhanced stealth features have been achieved through shaping of hull and use of radar transparent deck fittings which make these ships difficult to detect. P 15B ships will be equipped to carry and operate two multiple role helicopters.

These ships are packed with an array of state of the art weapons and sensors, including vertically launched missile system for long distance engagement of shore, sea-based and air targets. With significant indigenous content, these ships are a true hall-mark of self reliance attained by our country in warship design and ship building.

BRIEF ON PROJECT 15B – SUPPLEMENTARY INFO

Four Guided missile Destroyers of Project 15B (P 15B) are under construction at M/s Mazagaon Dock Shipbuilders Limited, Mumbai. The contract for construction of these four ships was signed on 28 Jan 11. These ships are amongst the most technologically advanced Guided Missile Destroyers of the world, with state-of-the-art weapon/sensor package, advanced stealth features and a high degree of automation. The design of P15B ships has been developed in house by the Directorate of Naval Design.

With a displacement of 7300 tons, each ship will span 163 meters in length and 17.4 meters at the beam. These ships will be propelled by four gas turbines in Combined Gas and Gas (COGAG) configuration and are capable of achieving speeds in excess of 30 knots with a maximum endurance of 4000 nm.

The P15B destroyers incorporate new design concepts for improved survivability, sea keeping, stealth and ship maneuverability. These ships will be equipped to carry and operate two multi-role helicopters. State of art rail less helo traversing system is being introduced on these ships for efficient helicopter handling onboard.

These ships can truly be classified as possessing a Network of Networks, as they are equipped with Integrated Platform Management System (IPMS), Ship Data Network (SDN), Automatic Power Management System (APMS) and Combat Management System (CMS). While control and monitoring of machinery and auxiliaries is achieved through the IPMS, power management is done using the APMS. The CMS performs threat evaluation and resource allocation based on the tactical picture compiled and ammunition available onboard. The SDN is the information highway on which data from all the sensors and weapons ride.

Stealth has been a major thrust area in P15B design. Enhanced stealth features have been achieved through shaping of hull and use of radar transparent deck fittings which make these ships difficult to detect. The ship embodies features such as Multiple Fire Zones, Total Atmospheric Control System (TACS) for Air Conditioning, Battle Damage Control Systems (BDCS), Distributional Power Systems and Emergency DA to enhance survivability and reliability in emergent scenarios.

The ship’s “fire power” consists of sophisticated weapons-sensor suite including vertically launched Surface to Air Missiles (SAM) and Surface-to-Surface Missiles (SSM) for long distance engagement of shore and sea based targets. It is also noteworthy that this ship has significantly high indigenous content, in the form of weapons, machinery and material. These ships therefore showcase the Nation’s growing capability in developing and delivering complex warships, which serves as a true hall mark of self reliance attained by our country in warship design and construction. This high level of indigenization has been achieved through participation of both public and private sector.

The second ship of P15B Yard 12705, christened, Mormugao, is planned to be launched on 17 Sep 16 at MDL, Mumbai, and will be the fifth frontline warship, including the indigenous aircraft carrier, being launched in last six years, in addition to the delivery of three frigates, three destroyers and two corvettes during the same period.