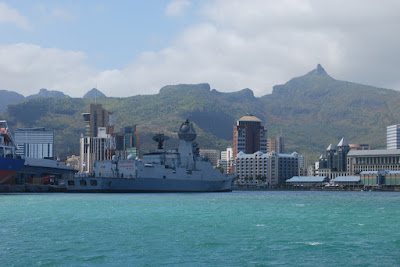 In a demonstration of India’s commitment to its ties with Mauritius and to promote maritime security in the Indian Ocean Region, Indian Naval Ships Kolkata and Aditya under the Command of the Flag Officer Commanding Western Fleet, Rear Admiral Ravneet Singh,NM have arrived today at Port Louis on a three day visit. INS Kolkata is commanded by Captain Rahul Vilas Gokhale and INS Aditya is commanded by Captain Vidyanshu Srivastava.The ships are part of the Indian Navy’s Western Fleet based at Mumbai under the Western Naval Command and are on a two month long deployment in the Western Indian Ocean.

The visit would contribute to further strengthening of maritime security cooperation between Indian Navy and the Mauritius National Coast Guard towards ensuring a secure and stable regional maritime environment for unhindered economic development in the region. During the visit, professional interactions for enhancing co-operation and sharing the nuances of naval operations, including disaster management and combating maritime threats of terrorism and piracy, would be undertaken by the two forces. Calls on senior Government and military authorities, training and technical cooperation measures with NCG, sporting and cultural interactions, aimed at strengthening ties and mutual understanding between the two forces, are also planned.

India and Mauritius have very close and cordial political and diplomatic relations with a sizeable settlement of people of Indian origin settled in Mauritius. India and Mauritius have accorded centrality to each other in their respective foreign policies. The frequent visits by high level delegations including the Heads of State have further strengthened the bilateral relations. Both countries have ratified a wide range of bilateral agreements, with defence cooperation being a very significant component. Mauritius Coast Guard Ships Barracuda and Guardian, vessels built at GRSE Kolkata and 11 Fast Intercept Boats built at Goa Shipyard Limited are examples of India’s commitment to capability development programme of Mauritius National Coast Guard and the deep rooted bonds between the two countries. Defence cooperation is also undertaken in the fields of training, hydrography and Maritime Domain Awareness.

Since 2009, the Indian Navy has been deploying ships to Mauritius bi-annually to assist in patrolling the vast EEZ of the country based on request by the Government of Mauritius. The last such deployment was by the Trikand in July 2016. Such visits also reinforce the cultural and ethnic ties between the two countries and are a testimony to the joint commitment towards maritime security in the region.