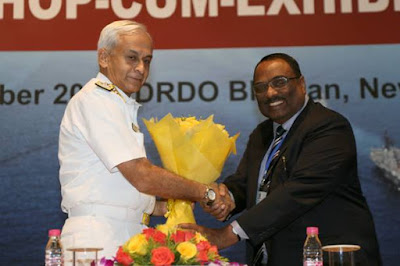 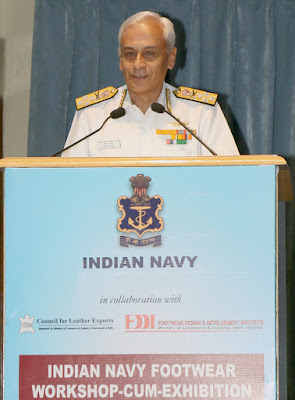 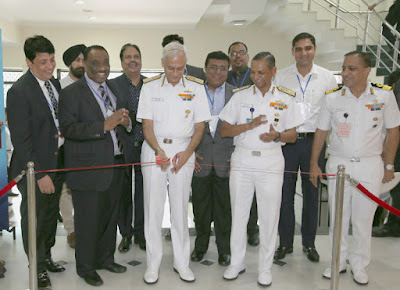 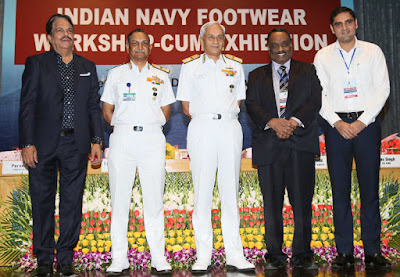 Indian Navy in association with Council for Leather Exports (CLE) and Footwear Design and Development Institute (FDDI) organised a maiden workshop on Footwear under the aegis of Ministry of Commerce. The Workshop conducted today on (29 Sep 16) at DRDO Bhawan, New Delhi was yet another effort by the Indian Navy to propel the cause of “Make in India”.

The Chief Guest Admiral Sunil Lanba, PVSM, AVSM, ADC, Chief of the Naval Staff during his address emphasised upon the importance of this workshop both for the Indian Navy and footwear industry and optimal utilisation of available technology to deliver in-house quality products to the Indian Navy. Vice Admiral Jaywant Korde, AVSM, VSM Controller of Logistics during the welcome address stated that, “By virtue of environment under which defence forces of our country and Indian Navy in specific operate, it makes the defence forces one of the largest consumers of normal and technical footwear. It makes it more pertinent to interact with industry and open up a two way dialogue which will serve the purpose of both Indian Navy as well as footwear industry. This will eventually help in furthering the efforts of Indian Government in boosting the economy of the country”.

CLE Chairman Mr Rafiq Ahmad delivered the keynote address on this occasion. The workshop was attended by some of the most prominent name in the field of footwear industry. Approximately 30 firms from footwear and associated industry participated in the event. The event also saw a large participation by personnel from sister services and paramilitary forces. Some of the most well-known personalities from the industry spoke on variety of topics related to footwear technology. The exhibition conducted during the event saw Indian Navy showcasing its entire range of Footwear inventory and addressed the concerns and queries of industry. Participating firms showcased their products and offerings which could be of immense use to defence as well as paramilitary forces.