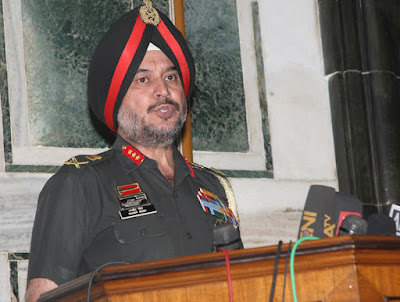 I had briefed all of you on the terrorist action in Uri yesterday. The Army operations have been called off after conducting a detailed search of the area in and around the military complex at Uri. The total recoveries from the slain terrorists is four AK 47 rifles, four Under Barrel Grenade Launchers, 39 Under Barrel Grenade Launcher grenades, five hand grenades, two radio sets, two GPSs, two Map Sheets, two Matrix Sheets, one Mobile Phone and a large number of food and medicine packets having Pakistani markings.

The Indian Army has displayed considerable restraint while handling the terrorist situation both along the Line of Control and in hinterland. However, we have the desired capability to respond to such blatant acts of aggression and violence as deemed appropriate by us. We reserve the right to respond to any act of the adversary at a time and place of own choosing.

1. Here is the statement by the Ministry of Foreign Affairs of Russia on the terrorist attack in the Indian state of Jammu and Kashmir:

We strongly condemn the terrorist attack against an army base in Jammu and Kashmir’s Uri in the early hours of September 18, which killed 17 and injured 30 service personnel. We offer our condolences to the families of the victims and wish a rapid recovery to all those injured.
Regarding the Pathankot Indian air base attack in January 2016, we are very concerned about the terrorist attacks near the Line of Control. We are also concerned about the fact that, according to New Delhi, the army base near Uri was attacked from Pakistani territory.

We believe that this criminal act will be investigated properly, and that its organisers and perpetrators will be held accountable.

We confirm our continued support for the Indian government’s counterterrorism efforts.

“Canada strongly condemns the terrorist attack on the Indian Army camp at Uri in Jammu and Kashmir on 18 September, which resulted in the death of 17 soldiers.
The Government of Canada extends condolences to the victims and their families. We are appalled by these attacks and stand with the Government of India in the fight against terrorism.”

The Government of Japan strongly condemns the terrorist attack on the Indian Base in Uri, Jammu and Kashmir, and extends its sincere condolences to those who lost their lives and their bereaved families, and expresses its heartfelt sympathy to those who were injured.

Japan condemns terrorism in all forms regardless of its purposes, and strongly reiterates that no act of terrorism can be justified. Japan expresses its solidarity with India in the fight against terrorism.

4. US Ambassador to India - Richard Verma - "We strongly condemn the terror attack in Uri, J&K. Our thoughts are with the families of the brave soldiers who lost their lives."


5. Afghanistan Ambassador to India - Afghan Shaida M Abdali . "We strongly condemn this attack, Afghanistan too has seen similar attacks. We hope this shared threat will be addressed effecetively."

6. Israeli Ambassador to India - Daniel Carmon : "Our Condolences to the Government & People of India,and to the families of the soldiers killed in the attack on Camp in Uri."

7. UK Foreign Secretary Boris Johnson - "The UK strongly condemns this morning’s terrorist attack in Indian-admned Kashmir. I offer my deepest condolences.UK stands shoulder to shoulder with India in the fight against terrorism, and in bringing the perpetrators to justice."