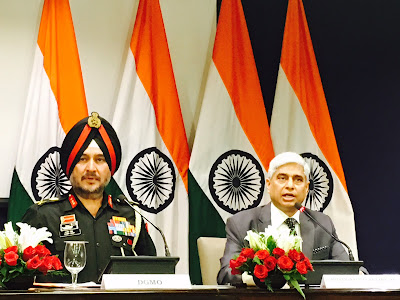 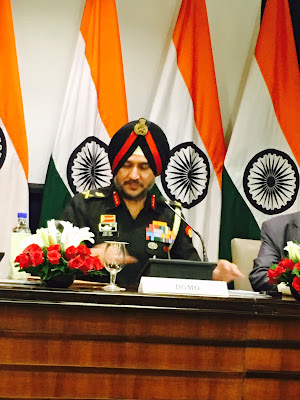 Official Spokesperson, Shri Vikas Swarup: Good afternoon friends. Welcome to this joint briefing and thank you for coming at such short notice. As you can see, I have with me the Director General Military Operations, Lt. Gen. Ranbir Singh. He will read out a statement to you in English, as well as in Hindi. I would now handover the floor to DGMO.

Director General Military Operations, Lt. Gen. Ranbir Singh: Ladies and gentlemen, Jai Hind and a very good afternoon to all of you. It has been a matter of serious concern that there has been continuing and increasing infiltration by terrorists across the Line of Control in Jammu & Kashmir.

Further, captured terrorists hailing from Pakistan or Pakistan Occupied Kashmir have confessed to their training and arming in Pakistan or territory under the control of Pakistan.
The matter has been taken up at the highest diplomatic levels and the military levels at regular times. India has also offered consular access to the apprehended terrorists to Pakistan to verify their confessions.

Furthermore, we have proposed that finger prints and DNA samples of terrorists who have been killed in Uri and Poonch encounters can also be made available to Pakistan for their investigations.
Despite our persistent urging that Pakistan respect its commitment made in January 2004 not to allow its soil or territory under its control to be used for terrorism against India, there have been no letup in infiltrations or terrorist actions inside our territory.
If the damage has been limited it has been primarily due the efforts of soldiers of Indian army who are deployed in a multi-tier counter infiltration grid and most of the infiltration bids have been foiled at those locations. The Indian armed forces have been extremely vigilant in the face of continuing threat.

Based on very credible and specific information which we received yesterday that some terrorist teams had positioned themselves at launch pads along the Line of Control with an aim to carry out infiltration and terrorist strikes in Jammu & Kashmir and in various other metros in our country, the Indian army conducted surgical strikes last night at these launch pads.

The operations were basically focused to ensure that these terrorists do not succeed in their design of infiltration and carrying out destruction and endangering the lives of citizens of our country.
During these counter terrorist operations, significant casualties have been caused to the terrorists and those who are trying to support them. The operations aimed at neutralizing the terrorists have since ceased. We do not have any plans for continuation of further operations. However the Indian armed forces are fully prepared for any contingency that may arise.

I have just spoken to the Pakistani Director General of Military Operations and explained our concerns and also shared with him the operations we had conducted last night.
It is India’s intention to maintain peace and tranquility in the region, but we can certainly not allow the terrorists to operate across the Line of Control with impunity and attack the citizens of our country.

In line with Pakistan’s commitment made in January 2004 not to allow its soil or territory under its control for any terrorist activities against India, we expect the Pakistani army to cooperate with us with a view to erase this menace of terrorism from our region. Thank you very much.

Official Spokesperson, Shri Vikas Swarup: We will not be taking any questions at the moment, but during the course of the day we will be providing more information to you as more information becomes available to us.

Thank you all.
(Concludes)