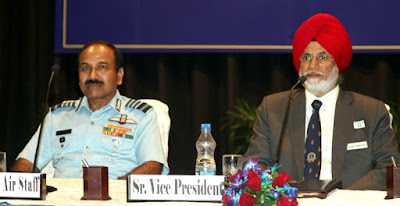 Air Force Association is a welfare organisation in the non-governmental sector, actively involved in the welfare of air veterans and their families since 15 Sep 1980. The Association was established under the patronage of Marshal of the Indian Air Force Arjan Singh Padma Vibhushan DFC. It has nineteen branches spread all over the country and abroad with two branches in UK and Australia. The raising day of the Air Force Association is celebrated on 15 Sep each year.

The Annual Day began in the morning with the Wreath Laying Ceremony at Amar Jawan Jyoti at India Gate on 15 Sep 16 in the memory of those who laid down their lives for the motherland. The wreath laying ceremony was led by the new president of Air Force Association Veteran Air Chief Marshal NAK Browne PVSM AVSM VM (Ret’d) who took over the responsibilities of association since 07 Sep 16. This was followed by Annual General Body Meeting held at Air Force Auditorium, Subroto Park, where-in some of the Air Force Octogenarians were honoured and were presented mementos by the Air Force Association, wishing them a healthy and long life. The Chief of the Air Staff Air Chief Marshal Arup Raha PVSM AVSM VM ADC was the Chief Guest. Many retired Chiefs of the Air Staff, along with large number of air warriors attended the Annual General Meeting.